Tunnels and Trolls in French 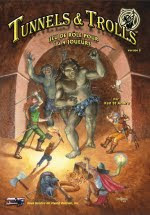 In case you were not aware, a revised version of the Tunnels and Trolls rules were recently published in French by Patrice Geille with the support of Ken St. Andre and Rick Loomis of Flying Buffalo. This new edition is based on the 7.5 edition of the rules with additional material incorporated from the 5.5 edition rules. From what I've been able to tell it is an excellent combination of the two rules sets and clears up many ambiguities from the 7th edition. Amazingly it also contains some original new artwork by Liz Danforth. Patrice and his colleagues have also been releasing some revised classic Flying Buffalo solo and GM adventures in French, again with all new art. These include Rick Loomis' Buffalo Castle (Chateau Bison), Ken St. Andre's A Riverboat Adventure (Le Nain Ivre), as well as Ken St. Andre's Lair of the Silver Serpent (A la Poursuite du Serpent D'argent) also known as Trollstone Caverns which includes some new material by Andy Holmes and a fantastic cover by Simon Lee Tranter. 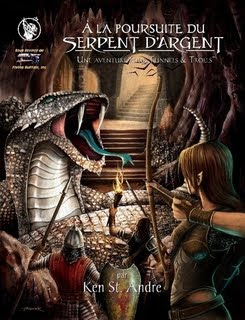 Visually these books are amazing, but I don't read or speak French so I have somewhat limited use of them; but if you do you should certainly pick them up. There are rumors that Flying Buffalo may release English versions of these books but nothing definitive has been said on the matter.

Check out the T&T French website for details and updates on new products being released.

You can purchase printed copies of the rules and adventures from the Lulu storefront. There is also a quick-start free version of the rules available from RPGnow.
Posted by Dan at 11:31 PM