I have been reading some of the reports on D&D 5th edition (or Next?) posted by Scott Malthouse at The Trollish Delver. I honestly don't care all that much about the development of this new edition. It's not that I don't like D&D the Moldvay Basic set was my introduction to role playing games and I still play PbP games using OSRIC and Labyrinth Lord. I just never thought any rule changes were necessary, even 2nd edition AD&D, but especially not complete overhauls (3, 3.5, 4).

What I did find interesting, however, was this statement:

Iconic monsters will remain threats at higher levels
This is something that has always bugged me about the game and it looks like it's finally being rectified. Iconic D&D monsters like goblins and orcs will be just as capable of challenging a party at 1st level as they will be at 8th level. Monte Cook said: "I think it offers a better play experience that the orc/ogre can remain in the campaign, and people can know how the monster would work from a previous experience, but they remain a challenge for longer." Instead of having a level 1, level 5, and level 8 orc, there will just be the quintessential 'orc' creature that easily scales.

I find the statement interesting because Ken St. Andre got this right in 1975 with Tunnels and Trolls 1st edition. With each monster assigned a Monster Rating (MR) by the Game Master and not a book, a goblin, orc, or even a jellyfish can be as weak or strong as you want to make it; there are no set standards that says a goblin has to be a weak opponent. In fact, no two goblins in that war party coming over the hill need to be the same. You can even tweak their MRs to reflect differences in weapons or armor. What is best is that it is simple and can be done on the spur of the moment.

Even better, your weak little monsters never really become insignificant in the T&T combat system. You may decide that all goblins have a MR of 10 giving them a measly 2D6+5 in combat. But what if you throw 20 or 30 of the little buggers at your overconfident friends? "They're only goblins," they'd sneer. But those dice and adds add up fast (40D6+100 for a company of 20 MR10 goblins) allowing those goblins to pack quite punch (up to 340 punches in fact); and if you are using spite damage? Ouch. That's 40 chances to roll a 6 on a six-sided die. Each 6 means one point of damage to those high and mighty PCs; no excuses, no way out. You're wearing enchanted plate armor and a shield made from a dragon scale? Too bad. This is quite different from the D&D mechanics where I have played high level characters that have cut through hordes of the rank and file with no risk of injury. The T&T system allows large numbers of small opponents to quickly overwhelm a few powerful ones. Hell, it happened to Conan countless times, why not your 6th level warrior? 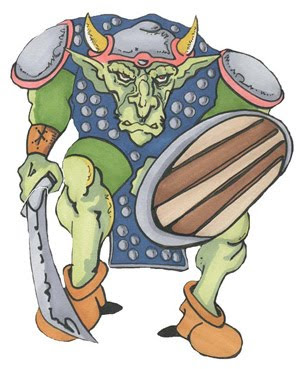 Goblin MR 10
Charge! Wait, there are how many? 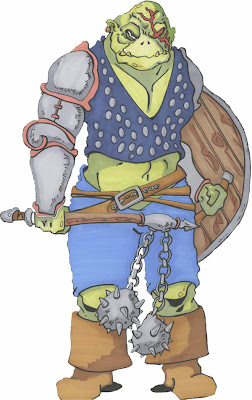 
(Illustrations by Robert Hermminger, used with permission.)
Posted by Dan at 10:07 PM