Phineas the Red has survived his first adventure and obtained wealth beyond his wildest imaginings. Phineas has also gained some valuable experience from his adventure. Although he is still a novice, Phineas feels a bit more confident in his abilities. Using my custom Level and Abilities system, Phineas has gained 292 APs toward his warrior level and gained a significant number of APs toward increasing his Dexterity, Luck, and Speed.

The first thing to do is to get out of town. Those serpent priest will certainly be looking for him and it wouldn't be wise to be caught at the local pawn shop haggling over the value of the Eye of the Serpent. Once he is safely out of town, Phineas sets about trying to sell off some of his stolen goods. Using the saving roll system I presented in my post on Treasure in Solos, Phineas was able to get almost 600 gp including the coins he scrounged from the slain serpent priests and guards. Phineas failed his SR when trying to sell the magic tome and the strange gold item; all of the other treasures were sold at 40% of their value (1st level SR) including the Eye of the Serpent. This netted him a mere 400 gold for the massive emerald, but what else would you expect when trying to sell a gem stolen from a cult with snakes at their disposal? Phineas decided to keep the green silk cloak, magic ring, magic bracers, and magic poniard; they were just too nice to sell. He had the local wizard determine the magical properties of his treasures for 150 gp (50 gp each to cast Omnipotent Eye, another solo house rule of mine). With his pockets satisfyingly full of coins, Phineas headed to the local merchants to purchase some better equipment and then went carousing for the night with his remaining gold.

The next day, Phineas wakes with a pounding headache and mostly empty pockets. Well, he always has the tools to get more money. Phineas packs his gear, straps on his armor, and checks his weapons. What challenge will he face next? 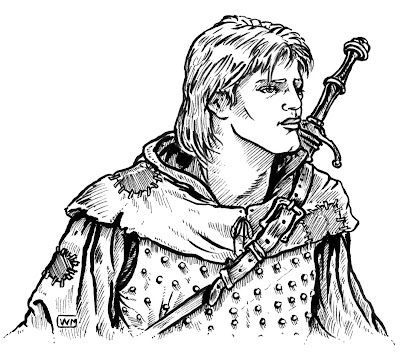 The Eye of the Serpent

This is the first in a series of solo adventures that I will be running Phineas the Red through. Each of these will include information that may spoil the adventure if you have not played it yet, so be advised. After each adventure post, I'll post an updated character sheet for Phineas showing his progress using my custom advancement system. At least until he meets his doom. This first adventure is The Eye of the Serpent, an excellent solo by Boozer (aka Andy Holmes) which is available online at the Gristlegrim site (see the link in the list to the right).

Phineas the Red sat at a small table drinking a pint of ale. He had been spending most of his days and nights at the Tavern of the Black Skull. He wasn't here for the ale or the company, however. The tavern sat right across from the Temple of the Timeless Serpent. Phineas watched the comings and goings of guards and priests as well as the occasional group of thieves that break their way into the temple, but never seem to come out. Phineas couldn't blame them, however, since rumors of the great treasures within the temple had lured him here as well. Most important of all are the stories of the Eye of the Serpent, a huge gem of untold value. The only problem is that this cult breeds and worships monstrous snakes; snakes that guard the treasures. But Phineas has been watching and knows the routine of the temple. Tonight he will see what lies beyond the temple walls and hopefully come out richer than the greatest princes of this gods-forsaken city.

Phineas waits for the night to reach it's darkest hour. The guards patrolling the outside of the tower are heavily armored in leather scale, but Phineas knows when they will be passing by. He looks for his in the faint light of the torches burning on the top of the tower. Then he sees him; a single guard making his regular patrol. Cleverly concealed by shadows, Phineas waits until the guard walks past then silently sneaks up behind him and runs him through with his short saber and bank. The blades cut cleanly through the guards leather scale armor and pierce both of his lungs. The guard cannot even utter a gasp as he slumps to the ground. Phineas drags the corpse into the shadows that concealed him only moments before. A quick search of the guard reveals a large brass key and 5 gold coins. A good start, Phineas thinks.

Phineas looks around for a way into the tower and spots a window 20' up. With the expertise of a trained professional, Phineas scrambles up the rough stone wall to the window and throws himself inside. As soon as he hits the floor he spots two guards. Phineas rolls out of sight but hears the guards talking and then one of then runs away. Had he been spotted? Best to be quick about things then, Phineas thinks. The room he is in contains a small desk and a chest as well as a partially open door leading into a lit corridor. Phineas checks the desk first and finds a small pouch of jewels and a ring. He slips the ring on his finger and suddenly feels more powerful. Phineas smiles at the possibility of encountering any more guards. Let them come. Phineas also notices a crystal statuette of a serpent sitting in the middle of a circle of runes. Circles of runes often lead to bad things, Phineas thinks, and he decides to leave it alone. Phineas then checks the chest and finds even more loot. There is a green silk cloak, a pouch of silver coins, a misericorde, and a set of bracers. In anticipation of any more encounters, Phineas pulls the bracers over his lower arms and feels better protected. Happy with his luck so far, Phineas goes to the door.

Phineas opens the door and steps into a dimly lit corridor. His luck suddenly changes as he finds himself face-to-face with a serpent priest. Phineas quickly draws his blades and attacks. The battle is fierce, but quick. The priest proves no match for Phineas' skill. After a few quick thrusts and parries, Phineas merely suffers a scratch and is able to dispatch the priest with little trouble. He searches the priest and collects a handful of gold coins. Phineas drags the priest's body into the room he just left and continues his exploration. To the left, the corridor ends at a spiral stair heading down. To his right is a large black door. Just opposite him is a door bearing a strange symbol.

Phineas checks the black door and notices that it has a keyhole. He decides to try the key he collected from the guard in the courtyard. The key fits perfectly and the door opens. As he steps inside, the floor shifts a little beneath his feet but then holds. Phineas enters a large chamber lit by green lanterns. In the center is a shaft leading down into darkness. Unfortunately, there is also another serpent priest in the room. His blades still in hand, Phineas charges and cuts the priest down before he can call for help. With the priest dispatched, Phineas looks around the room and sees a chest. Opening the chest, he finds even more treasure. There is a magic tome bound in snake's skin that is sure to fetch a few hundred gold from the Wizard's Guild. There is also a pouch containing 9 gems and a finely made poniard. This is indeed the most profitable venture Phineas has ever undertaken. After stowing the treasures in his pack, Phineas decides to exit by the door rather than risk the pit.

But when Phineas steps back out into the corridor, he runs into yet another priest. This is getting ridiculous, Phineas mutters to himself, don't these priests have services to attend? A short fight leaves the priest dead and Phineas with a few more small scratches.

Phineas goes to the door with the strange symbol. He opens the door, expecting to meet yet another priest, but the room is empty. The small room is painted green. A large serpent is painted on the floor and the room is lit by a large fireplace. Next to the fireplace is a chest. There is also a large book open on a lectern and a glowing circle of green light on the floor. Phineas decides that all of the chests in this temple are all filled with gold so he checks it first. This chest proves no different. It is filled with various gold trinkets designed with a serpent theme. He picks one item that he thinks will fit in his pack as fetch a couple dozen gold coins. Next, Phineas checks the book. It is an amazing find, The Life of Kigolath the Hideous, by Jerendavudd. The book is bound in human skin and, while disgusting, would fetch at least 600 gold from the right buyer. The book is massive, however, and he would have to leave immediately if he took it. Considering his options, Phineas decides to leave the book. He is here for the Eye of the Serpent and he means to find it. The glowing circle then catches Phineas' eye. Phineas had heard of wizards using symbols to transport themselves from one place to another. Perhaps this leads to the Eye? Phineas holds his breath and steps into the circle.

Phineas exhales and looks around. He is no longer in the room with the green circle. He stands in a small, circular chamber with rough hewn walls and a stone floor covered in rotting straw. Most disturbingly, skeletons hang from iron rings set in the wall. A single exit stands in the wall which Phineas quickly heads through. As he enters the next room, Phineas sees the object of his desire. Sitting on an ornate framework of lattice silver is a huge emerald. It could only be the Eye of the Serpent, a gem worth 1000 gold coins. As he steps forward, another stone shifts below him but then holds. Phineas breathes a sigh of relief, but then a massive serpent head descends upon him. In a feat of amazing speed and agility, Phineas dives to the left and avoids the serpent's bite. Phineas leaps to his feet, weapons in hand and attacks the snake. The battle is long and difficult. More than once, Phineas fears that he will never see the sun again but then he lands a savage blow with his short saber that cleaves the serpent's head from it's body. The body writhes and thrashes for a few moments, but then is still. Phineas takes no time to celebrate, however. He quickly grabs the Eye and flees back to the window he came in through and out into the night.