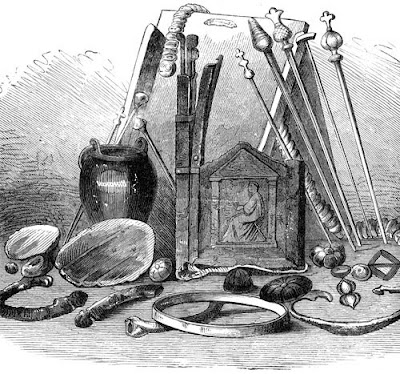 At the end of the day, what most delvers want is a pocket full of gold and maybe a shiny new magical item. Sure, you can feel good that you rescued that kidnapped family member, ended the tyranny of an evil overlord, or got the better of some madman's twisted maze; but do good feelings put ale in your cup? The lure of monetary reward has been the driving force behind adventurers reckless forays into places better left untraveled since the start of fantasy role playing. Solo delvers expect nothing less. Of course, even in solo adventures the treasure that delvers recover need not be a convenient, ready to carry sack of gold coins.

This is a topic that has been covered by many authors in the past. One of my favorites (forgive me) comes from the AD&D 1st edition Dungeon Masters Guide. On page 92, Gygax describes the assembled treasure of two ogres. This treasure does not simply consist of gold coins or a few large gems. Instead it reflects the activity of the ogres who have been raiding the countryside. Their treasure does include silver and copper coins and a piece of jewelry, but also pewter vessels, helmets, weapons, clothing, and food. This leaves the adventures who slay the ogres with the additional challenge of identifying what is valuable, carrying the treasure out of the ogre lair, and later selling the random collection of items.

When designing solo adventures, I try to follow this general guideline. There should be a reason for the treasure to be where it is found. Since many of my adventures take place in old buildings, ruins, or tombs this is typically not a problem. The treasure represents the furnishings, collections, and wealth of the previous occupants. If any of this wealth includes coinage, it should be old and strange. Jewels and jewelry are always good to have. Every civilization uses materials it considers valuable to make adornments with which to display personal wealth. This includes rings, necklaces, bracelets, earrings, and crowns. These can be made of any conceivable material, from beads and stone to gold and silver. But these are all very straight forward treasures and can be produced using the T&T treasure generator. What about everything else? 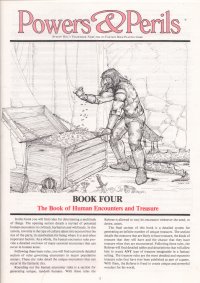 One of the most comprehensive sets of rules for generating unique treasures comes from one of the most comprehensive sets of FRP rules, Avalon Hill's Powers and Perils. You can actually download scanned copies of the rules for free from this fantastic Powers and Perils website. The rules for treasure generation include tables and descriptions of coins and jewels but also books, scrolls (not just spells but documents and maps), containers, eating and drinking implements, coverings (tapestries, rugs, etc.), furs, furniture, keg goods (food, spices, drink,), musical instruments, statues, tools, weapons, armor, herbs, and of course magical items. I typically consult these tables to get ideas for treasures when designing solos. In doing so, I'm able to make most of my treasure hoards unique.

Once a solo delver manages to complete an adventure, he then needs to turn some of his hard-earned spoils into cash. You could just collect gold equal to the value listed in the adventure, but where is the sport in that? This is easy to do in a GM run game where the player and GM can haggle over the price, but it is not so simple in solo gaming. Gary McCammon prepared an excellent table for selling weapons and armor in the first issue of Trollszine. In this table, the character receives from 150% to 50% of the book value if a L4 to L1 Saving Roll on Luck can be made. If you can't make any saving rolls, then you can sell the item for 25% of its value. In the rules for his 1st edition T&T Wildlands campaign, Burke presented a similar saving roll table for both the purchase and selling of items based on either Charisma or Luck. Here is my own saving roll table for selling items:

Another method to use when designing solos is to make the value of certain items random. While the price of a short sword or steel cap are known, the value of a gold statue or elaborate rug certainly won't. In the treasure description you can present a D6 value in gold, silver, or copper coins (Ex. a gold statue worth 3D6 gp). This serves as another piece of randomness to add to the adventure so that on the players next run things are not exactly the same. If the character were to survive and try to sell the item, two rolls would be needed; one roll to determine the actual value of the item and a second to see how much he can get.

As a solo designer treasure can be more than just a reward for rampaging delvers. Treasure can add to the flavor of your solo adventure. Rather than giving the evil necromancer a chest filled with gold and silver coins, consider what items such a man would own. What sorts of tools would be required to serve his dark gods? What types of art would he use to adorn his temple? What would he have stored away in his pantry (even a necromancer has to eat after all)? All of these items can be used to set the scene of your adventure. It's up to the player to recognize what might be valuable and haul it away.