Do Not Purchase From or Submit To Outlaw Press

Recent events have led me to decide that a reminder of the dishonest, unethical, and illegal actions of Outlaw Press and its sole proprietor James Shipman is necessary.

I am not working and will never work with James Shipman and Outlaw Press. I know that Mr. Shipman has been making statements to this effect on his website. I have not submitted anything to Outlaw Press for publication since I became aware of his illegal practices in 2009. There are no special editions of any of my solos available from Outlaw Press. I also have not given him permission to use articles from this blog in his "magazines." As the current editor of TrollsZine I have not given Mr. Shipman permission to sell printed copies of TrollsZine nor do I have the right to do so. The previous editors have also not given Mr. Shipman permission to sell older issues of TrollsZine. These are fraudulent and libelous statements intended to harm my reputation. I have saved copies of these statements and I am currently seeking advice from an attorney as to what actions to take. Anything of mine that is being sold by Outlaw Press is done so without my permission.

Obviously I am not the only one affected by the actions of James Shipman. He has a long history (since 2001) of trying to sell:

*Free RPG products without permission (Mazes and Minotaurs, TrollsZine, Escape from Khosht, and The Old Dwarf Mine are a few examples)

The last matter is what ended up exposing Mr. Shipman's practices. When he opened an Outlaw Press storefront on RPGnow several artists saw their stolen work on the covers of his products. To date over 70 artists and writers have confirmed that their work was used without permission or compensation. The result was the end of Outlaw Press as a perceived legitimate business. Outlaw Press is not and never has been an official publisher of T&T material nor does Mr. Shipman does have permission to use the trademarked Tunnels and Trolls name in the products he sells, most of which also violate third-party copyrights.

Since then Mr. Shipman has been acting to undermine the rising number of small press T&T publishers authorized by Rick Loomis of Flying Buffalo and Ken St. Andre by pirating their work. He has been even more active in his work against Flying Buffalo and Ken St. Andre who has repeatedly asked Mr. Shipman (more nicely than he deserves) to stop these practices. Doing business with Outlaw Press only hurts Tunnels and Trolls: the game, designers, the community, and everyone trying to do things the right way by respecting the creative works and rights of others. In my opinion, Mr. Shipman's current actions are just another failed attempt to destroy the community and stop anyone else from producing new, legitimate, and authorized material for T&T.

Here is an extensive yet not exhaustive list of links to visit to learn more about Shipman and Outlaw Press. The first two links will take you to pdf documents showing a large number of examples of verified art thefts, who it was stolen from, and where it was published. It's rather astonishing.

Disclaimer: All of the information presented below is freely available on the web and a matter of public record. It is used here for educational purposes.

(Note: Some comments on the posts above seem to be from people who have also discovered their material being published without authorization.)

An overview of Outlaw Press activity since 2007:

Posts by writers and artists whose work has been stolen:


If anyone has had material stolen by Outlaw Press I would urge you to contact Lawyers for the Creative Arts. This group provides free legal advice and will help you get in contact with an attorney who will work pro bono.

Everyone else should file a complaint with the Better Business Bureau, the Outlaw Press web host Novatrend (Claudia Eigenmann - eigenmann@novatrend.ch), and his online payment service Paypal. Three or four complaints may not be enough, but 50 or 60 will certainly result in swift action by the parties involved.

If you are a T&T fan who is also writer or artist and you are interested in publishing your work please do so. There are many legitimate publishers of T&T material. Both Flying Buffalo and Fiery Dragon are interested in publishing new T&T material. There are also many authorized independent publishers including Peryton Publishing, Trollish Delver Games, Troll Hammer Press, Tavernmaster Games and my own Lone Delver Games. Self publishing is always an option and is becoming very simple; just be sure to contact Ken St. Andre and Rick Loomis if you are using the Tunnels and Trolls name and rules.

The most effective way to put an end to the activity of James Shipman and Outlaw Press is for the entire community to act together. Boycott Outlaw Press, spread the word about his actions, file complaints, and above all publish.

To close, here is an example of stolen art from the Outlaw Press magazine Hobbit Hole #2 first published in 2001 and reprinted in 2007: 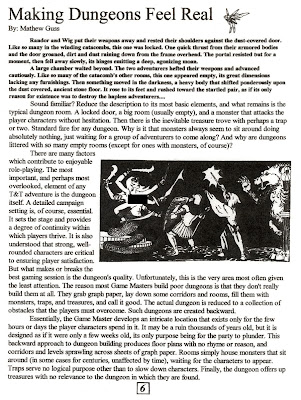 The illustration on this page is by David Sutherland and is from the OD&D supplement Eldritch Wizardry published by TSR and currently owned by Wizards of the Coast. Do you think he has permission to use this image and earn money from its sale?
Posted by Dan at 11:30 PM