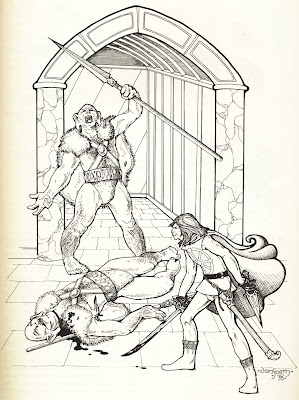 Another month, another lone delver caught in action. Here is yet another amazing illustration by Liz Danforth, this one from the City of Terrors solo. This solo contains most of the iconic T&T art from the early history of the game. It's also a famously tough adventure allowing characters with up to 275 adds. In this illustration, the lone delver has just slain an ogre. Unfortunately, his twin brother smells the blood and comes out to investigate. The sight of his dead brother throws the ogre into a berserk rage. The delver has his work cut out for him; it's a good thing he has two weapons. Although his tunic with the target on it might not be the best idea.
Posted by Dan at 9:31 AM