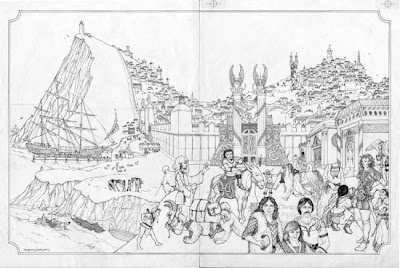 As you might have guessed from some of my previous posts, I am a big fan of Liz Danforth. Her art, along with that of Rob Carver, forms most of my mental image of Tunnels and Trolls. Liz is still an active professional artist, writer, and gamer and has her own blog. On this site, Liz has started what I hope to be a continuing series, 'Pictures Have Stories.' In this first installment, Liz explains the history of the iconic original City of Terrors cover. This impressive piece is the cover of the original solo; if you own a later edition (as I do) you'll find the same two-page illustration in the center of the book. Liz worked on this cover with Rob Carver in what is a seamless and impressive merger of styles. The blog discusses the inspiration behind many of the faces and images depicted in the cover as well as the many people involved with Flying Buffalo at the time. There's even a link back to The Lone Delver.

If that was not enough, Liz Danforth is now offering the original 1978 City of Terrors cover for sale on eBay. This is not a copy, but the original inked illustration from 1978. This is a chance to own a piece of T&T history. The cover will be available for bidding until March 25.
Posted by Dan at 2:20 PM