Giving Spears Their Due 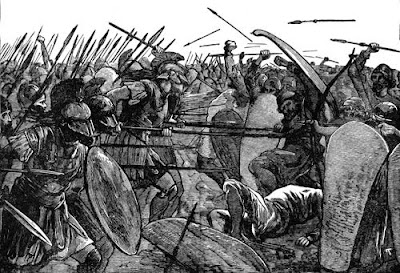 I've always thought spears were the most underrated weapons in FRPG games. Everyone and their uncle seems to have a sword or two hanging from their belt, but where are the spears? The spear was one of the most versatile weapons of the ancient and medieval world; it was the rifle of it's time. It was also cheap and easy to manufacture in large quantities to equip large groups of warriors. So why are they so uncommon in the armaments of FRPG warriors?

Let's look at the stats for a typical sword and spear from Tunnels and Trolls 5th edition:

But weapons can be more than a list of numbers in a game. In reality, spears are the perfect all-around weapon. They are excellent at keeping enemies at bay when paired with a nice shield, especially when you have three of four other spear-wielding friends by your side. That 6' shaft allows you to hit your enemy first, especially if that enemy is wielding a 3' sword. This is also useful if you happen to be facing mounted opponents. Due to it's length, the spear can be wielding with one or two hands; when used two-handed the spear should be able to deal more damage as more force can be applied to the point of the blade. While typically used as a thrusting weapon, the spear can also be used as a slashing weapon if the spear head has a broad blade or the shaft could be used as a bludgeoning weapon. Of course the spear can also be thrown when needed, killing your opponents before they even get close enough to attack you. Try that with a sword. Once the battle is over, a spear makes a handy walking stick and they are good for probing the ground in front of you that may not be as stable as it looks (or checking the depth of a pool of water, pushing and nudging objects from a comfortable distance, pushing open doors, or even enchanting into a makeshift staff). Why carry around a 10' pole that you have to cast aside when trouble starts when you can carry a spear?

Unfortunately while all of this can be taken into account during a group game without need of special rules, the same is not true of solo adventures. In group games controlled by a GM, players have much more freedom of action. If the party wanted to form a wall of shields and spears to hold back a horde of monsters, for example, the success or failure of this action is dictated by the GM who can adapt and improvise as he/she sees fit. If nothing else there is always a saving roll that can be called upon. Solo gaming, however, always presents a problem when trying to be clever with your equipment. As a player, you can act as your own GM, making judgment calls and saving rolls as you see fit. This is especially true of non-combat uses of spears and other pole-weapons such as probing for pits and traps. But I was considering some house rules for using the common spear in combat to make them a bit more popular. I'll be trying these house rules in some solo adventures to see how they work out.

Two-handed wielding: When wielded 2-handed, the common spear is a 3+3 weapon.

Bludgeoning: The spear may be wielded as a staff (bludgeon) for 2 dice (useful if your opponent takes less damage from thrusting weapons).

First strike: When attacked by opponents with weapons 3' long or less, the spear wielder may make a L2-SR on DEX to get one free attack before the opponent closes.

I have gotten to the point where I equip all of my warrior characters with a spear and shield to start with along with one or two other hand weapons, typically a short sword of some sort and a dagger that can be wielded together for close and dirty fighting. A sling is usually a good thing to have a well just in case. At 1 gp why not have one? I've found this combination of weapons provides a nice basic tool kit to work with in nearly any situation.
Posted by Dan at 2:00 PM