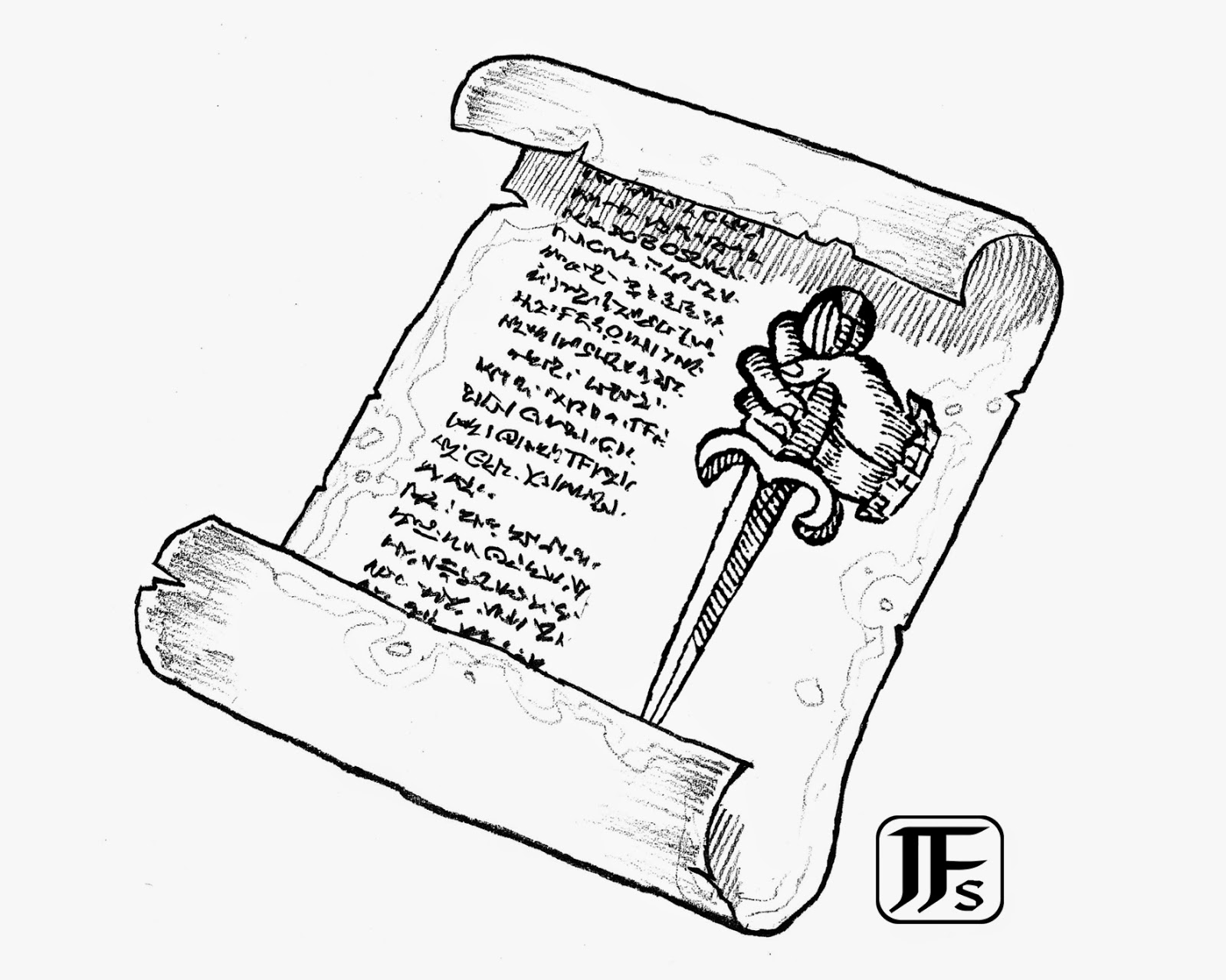 Spell scrolls are a standard type of magical treasure in most fantasy RPGs, however, they have not been described in any of the T&T editions. There is mention of "bespelled items" in the Monsters and Magic Book that comes with 7.5 edition that could be used for scrolls, but even these are not very well described. I have come to a point in one of my T&T Play-by-Post games where I need to introduce some spell scrolls, so I have some new House Rules to develop.

Spell scrolls are basically sets of instructions for casting spells. These instructions include words to speak, symbols to write in the air or on the ground, hand gestures to make, and other complex movements of the body. They are also imbued by their creators with the energy required to cast the spell. For this reason spell scrolls will radiate magic which can be sensed with a Detect Magic spell.

Casting Spells from Scrolls
A scroll can be read to cast the spell directly. The power to cast the spell is stored in the scroll so it costs the caster no WIZ (or ST) to cast. If using 7th edition T&T, an INT Saving Roll at the level of the spell is still required to successfully cast the spell. Once the spell is cast, the power is released and the scroll disintegrates (even if the casting is not successful). Wizards, Warrior-Wizards (aka Paragons), and Rogues can cast spells from scrolls, but must have the appropriate INT and DEX requirements. When casting a spell from a scroll in combat, no other actions may be taken by the caster in that combat turn.

Learning Spells from Scrolls
Wizards and Warrior-Wizards can also learn new spells for their arsenal by studying spell scrolls. This is time-consuming, expensive, and sometimes does not work, but it is generally cheaper than going to a Guild to learn new spells. Studying a scroll takes one week of game time per spell level and 200 gp per spell level in materials and research supplies. At the end of this period, the spell must be cast to fully comprehend the instructions. This requires an INT Saving Roll at the level of the spell. If the caster succeeds in the SR, then the spell is committed to memory. If the SR is failed, then the knowledge escapes the casters mind and the spell is not learned. In either case, the scroll disintegrates and is lost as the energy stored in the scroll is released.

Making Scrolls
Having a collection of scrolls handy while delving can be a huge advantage. They can allow Wizards to cast spells even after they have expended all of their magical energy, allow Rogues to cast spells they otherwise would not have access to for a variety of legal and financial reasons, and allow all casters to cast spells they just don't have the power to use in terms of Wizardry or Strength. For this reason, making scrolls can be an important part of preparing for your next adventure.

Wizards and Warrior-Wizards can create spell scrolls for the spells that they know. Just like learning spells from scrolls, this takes time and money and may not work. To produce a spell scroll requires one week of game time per spell level and 250 gp per spell level in supplies. At the end of this period the Wizard must make an INT SR at the spell level to successfully create the scroll. If the SR is failed, something went wrong and the scroll is worthless.

Spell scrolls can also be purchased from various magical shops or on the blackmarket (for Rogues) at a cost of 350 gp per spell level. If the GM wishes (or player for solo campaigns), a Luck SR at the spell level may be required to see if the scroll is available.
Posted by Dan at 5:43 PM