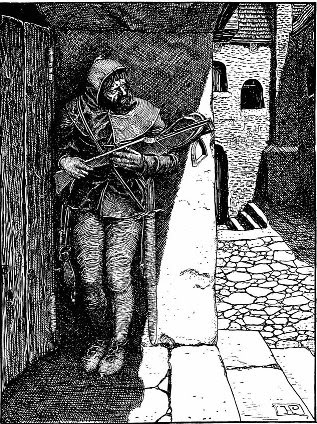 This lone delver is on an urban "delve". While there is a lot of fun to be had playing in adventures set in ruins, dungeons, caverns, and similar environments, city adventures are no less exciting and perhaps a bit more dangerous. It's hard to tell friend from foe and you can easily end up with a dagger in your back while walking down a familiar street where you felt totally safe. You also can't just run around slaying the "bad guys" and looting their homes without drawing official attention; they usually have greater numbers and strength. Stealth, guile, and subtlety are key in urban adventures.

Lightly armored and hiding in the shadows with a loaded crossbow and a coil of rope on his belt, I imagine this lone delver as a Rogue. He is clearly up to no good; perhaps waiting to ambush someone. But who is he waiting for and what is his goal? Is he a man with a vendetta seeking retribution against those that wronged him? I think so.

Here is our lone delver as a T&T 7.5 edition character:

Background: Killian is the youngest son of a wealthy merchant from the city of Dunvee. Killian's father had tried to teach his son the ways of trade and business, but Killian always preferred to busy himself with less serious matters. Killian enjoyed spending his time in the less savory parts of the city and mixing with the "wrong" kinds of people. Then came the day that the chief business rival of Killian's father, Olmar Hygar, grew tired of being number two in Dunvee. Olmar hired a band of mercenaries that broke into the Osgood's home in the dead of night. None were spared. But Killian was not at home; he was off on another of his adventures in the slums. When Killian returned to see what had become of his family, he immediately fled knowing what would happen to him if he were found.

Killian went into hiding in the poor districts. He took what jobs he could, usually not the legal kind, learned what he could of fighting and thievery. Killian was amazingly adept with a crossbow and became well-known for his ability as a marksman. He also learned the benefits of applying various poisons to his bolts to achieve the maximum effectiveness of each shot. Eventually Killian became and apprentice of sort with a renegade wizard; the wizard told Killian that he had untapped potential in the dark arts. In exchange for his services, the wizard offered to teach Killian how to use this ability. Killian immersed himself in the study of magic, quickly realizing that there were few obstacles that he could not overcome with this new found power. Killian began tackling harder jobs and earning greater rewards. But through all of his adventures, Killian never wandered far from Dunvee and he did not forget his family. The money he made did not go toward luxuries; Killian was preparing. He'd learned that it was Olmar Hygar that had orchestrated the murder of his family. He knew where Olmar lived, he knew his routines, and he knew the people that worked for him.

Eight years after the murder of his family, Killian had become a hardened and dangerous man; and he had a plan. Killian spent everything he had on a few special items. He was going to Olmar's estate and he was finally going to settle the score.
Posted by Dan at 10:39 PM