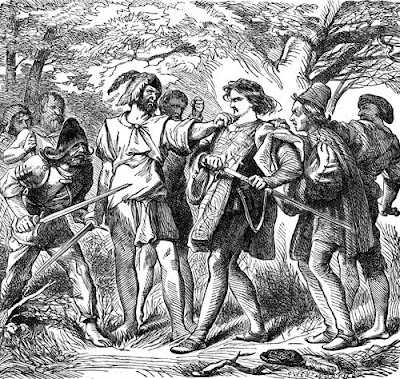 Combat resolution in Tunnels and Trolls is well known for being simple and abstract. Combat mechanics break down simply into each side rolling a handful (or bucket full as the case may be) of six-sided dice, adding them up, and comparing the two final numbers. Whichever side has the highest score wins and the loser takes damage equal to the difference in the two numbers. What could be simpler? Of course, some players are not completely happy with this system. It can create situations where only one side takes damage for an entire battle or never-ending struggles when two sides are evenly matched. This was partially taken care of by the addition of 'Spite' damage, where 1 point of damage is dealt for every six rolled regardless of whether who won or lost the combat turn. The system is also a bit too abstract for some players who prefer to have more complex combats resolved for each individual rather that sides. In response to this, there have been alternate combat mechanics suggested. I am aware of three that I like to some degree which I describe below. I have also been considering one of my own design.


Ken St. Andre wrote about adapting the rules of T&T to fit your own style of play in his essay "A World of Your Own" from White Dwarf #20 in 1982. Of course, Ken has always stated that players are free to change the T&T rules in whatever way they want; it is in fact the core tenant of the T&T rules. But in this essay, Ken specifically mentioned the combat mechanics of T&T and briefly described an alternate means of running combat to handle the 'problem' that only the losing side takes damage. In this system players and monsters have a percentage chance to hit, that way everyone has a chance to hit and score damage regardless of a winning or losing side. If a hit is successful, then the dice are rolled for the weapon, weapon and personal adds are accounted for, and that is the amount of damage dealt. Ken presents an example of a dwarf attacking a dragon. The dwarf has a 50% chance to hit with his axe, which does 5 dice + 3 damage in addition to his 10 personal adds. The dragon has a 65% chance to hit and has a Monster Rating of 200 giving him 21 dice and 100 adds. This is an interesting idea; Ken states that this is similar to the RuneQuest system of the time. It does require some way of determining the percent chance to hit for each character and monster, however. For characters, this could be based on character type and level. With only three basic types, this is fairly simple. A warrior type could start at 50%, a rogue at 40%, and a wizard at 30% for example. For simplicity, chance to hit could increase by 5% per level for all types. Monsters might be a bit more complicated, but it could be a simple formula like (50% + MR/4) rounded down to the nearest 5% (i.e. MR 1-19 = 50%, 20-39 = 55%, 40-59 = 60%, etc.). I like the idea of this system, particularly for solo adventures where you sometimes face monsters that you just cannot beat using the standard T&T combat system and where there is no option to flee. The damage potential of weapons and monsters might need to be altered for this system to work effectively, however; most battles might be over after a single die roll if starting Constitution is determined with 3D6 and most weapons do 3D6 to 5D6 points of damage.


In an article entitled "Elaborations, Variations, Complications" published in Sorcerer's Apprentice #17 (1983), Stephan Jones described another type of variant combat for T&T. Stephen indicated that his system solved the "all or nothing" method of normal T&T combat. In this system combatants have an Attack Total (AT) and a Defense Total (DT). The AT is determined by rolling weapon dice and then adding weapon adds and personal adds as in normal T&T combat. This number is compared to the DT of his/her opponent. The DT is equal to the defenders personal adds, the number of weapon dice, and the value of any armor and shield. If your AT is greater than the DT of your target, then you have scored a hit. To find the number of hits of damage dealt, you simply subtract DT from AT. Warriors are given the option of splitting their AT against multiple opponents. This is an interesting system that keeps the basic simplicity of the standard T&T combat system, but effectively separates attack and defense abilities. It also makes defense entirely static as opposed to standard combat.


John Harrington's Tunnels and Trolls Players Companion from Take That You Fiend! Magazine presented another alternate combat system with separate attack and defense scores. In this system, the combat total is rolled as usual (weapon dice rolled + weapon adds + personal adds), then each combatant decides how many points will be allocated to Attack and Defense. In this way, some individuals can focus on defending themselves while others may commit all-out-attacks. The attack scores are then compared to the defense scores for those involved in the battle. If the attack score is higher, then a hit is made and the difference determines the number of hits to be absorbed by armor and Constitution. Obviously, this does require the combat to be broken up into individual fights if there are more than three combatants. This is another simple but effective-looking system, but it does have one major drawback. Because it requires the combatant to choose how much they commit to attack and defense, it wouldn't do well in solo play. In group play, however, it seems like a good alternative.


My own current thoughts on an alternate combat system are based around the T&T Saving Roll. It works so well in so many situations including ranged combat, why not use it for close combat as well?

Example: Brion the Ugly is a 1st level warrior with a Combat Ability of 14, a Constitution of 12, 6 Personal Adds, wields a saber (3+4), and has soft leather armor and a target shield (takes 9x2 hits). He is fighting a goblin with a MR of 20 wearing armor that takes 4 hits. Brion needs to make a L2SR on his CA to hit the goblin which means he needs an 11 or greater on 2D6. To improve his odds of hitting, Brion's player opts to commit all 6 of his Personal Adds to the 'to hit' roll so that he only needs to roll a 5 or greater. Brion's player rolls a 7 and hits. He now rolls 3D6+4 for damage and gets a 14. Ten hits get past the goblin's makeshift armor, seriously wounding him.

Personalized monsters with attributes and levels can be easily used in this system. For opponents with Monster Ratings, you should assign a Combat Ability which could be equal to 3/4 of their MR or whatever the GM chooses. This caveat allows for the production of highly skilled but physically weak monsters in the Monster Rating system. The level of saving roll needed to hit is determined using the same table as for characters. As a rule, monsters cannot apply their adds to their Saving Roll.

As in regular T&T combat, attacks are considered simultaneous, and the effects of damage are not considered until the next combat turn.

As you can see, this method of combat resolution can lead to quick kills. As with Ken's suggestion above, application of this system would require the reduction of damage dice and adds.

Another interesting aspect of this combat system, is that it allows a change in the way Adventure Points are awarded for combat. Traditionally all combatant earn APs equal to the evenly divided MR total of the opponents defeated. In a Saving Roll based combat system, APs earned in combat can be based on the the SRs. In the example above, Brion's attack on the goblin (L2SR) would earn him 2 x 7 = 14 APs. What I really like about this idea is that the number of APs earned in a fight is controlled by the challenge presented. A Level 1 character fighting a monster with a MR of 30 will earn significantly more APs than a Level 3 character fighting a monster with a MR of 10 (if he survives) and that's how it should be. Adventure Points are supposed to be awarded on the basis of overcoming challenges. Also, in this system, a character can earn APs from a battle even if he/she loses and survives or runs away after a few combat turns. One potential problem with this sytsem, however, is that those not actively involved in the hand-to-hand combat, like wizards, won't earn AP. But, they still could gain AP by contributing to the battle by casting spells or firing missile weapons (these SRs would now count toward earning AP). So this actually sets the stage for the different character types earning APs and Levels in different ways; warriors fight, wizards cast spells, rogues do both. I kind of like that idea.
Posted by Dan at 12:00 AM