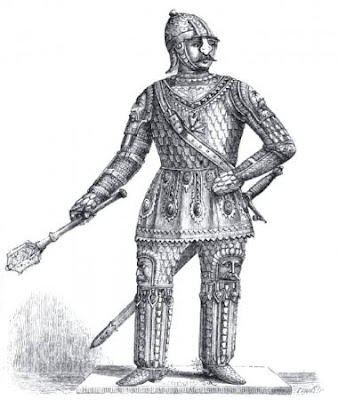 Humans always seem to get marginalized in fantasy RPGs, and T&T is no different. Dwarves, elves, hobbs, leprechauns, even fairies all get some nice attribute bonuses to give them an edge over their human counterparts. In earlier editions of the game (1st and 4th editions) many of these bonuses were not even balanced by penalties. I've discussed the effects of these various attribute modifiers in previous posts so I won't go into it again here.

But what about humans? Yes they are typically viewed as the standard against which the other kindred are compared. So dwarves are typically stronger and healthier than your average human while elves are smarter, more agile, and prettier if a little less robust. But don't humans bring something special to the table?

What makes humans so successful in our own world? We lack the strength, dexterity, and constitution of most other large mammals (for the most part), but we do tend to be smarter (again, for the most part). What do we use this intelligence for? We make tools; tools that allow us to survive the elements, collect food, and defeat our enemies. I think, therefore, that humans in T&T should start with more of these tools than the other kindred.

We can model this condition by simply modifying the amount of gold with which newly created humans start the game. Starting gold for humans can be determined either by rolling 4D6 and multiplying by 10 or by rolling 3D6, multiplying by 10, and then applying a 1.5 modifier (rounding up). This gives humans 40-240 gp to start using the first method and 45-270 gp to start using the second method; it all depends on how much of an edge you want to provide. Compare this to the typical starting amount of 30-180 gp. The average amounts of starting gold come to 105 (standard), 140 (4d6), and 158 (1.5 modifier). This extra gold can be used by your human character to buy better armor, weapons, and equipment than his/her non-human companions possess. This falls right in line with how humans deal with adverse conditions despite their relatively frail bodies and it is not an overwhelming advantage in terms of game mechanics. Of course if you wanted to provide more of an edge, you could increase the number of dice or increase the modifier to 2.
Posted by Dan at 11:15 AM