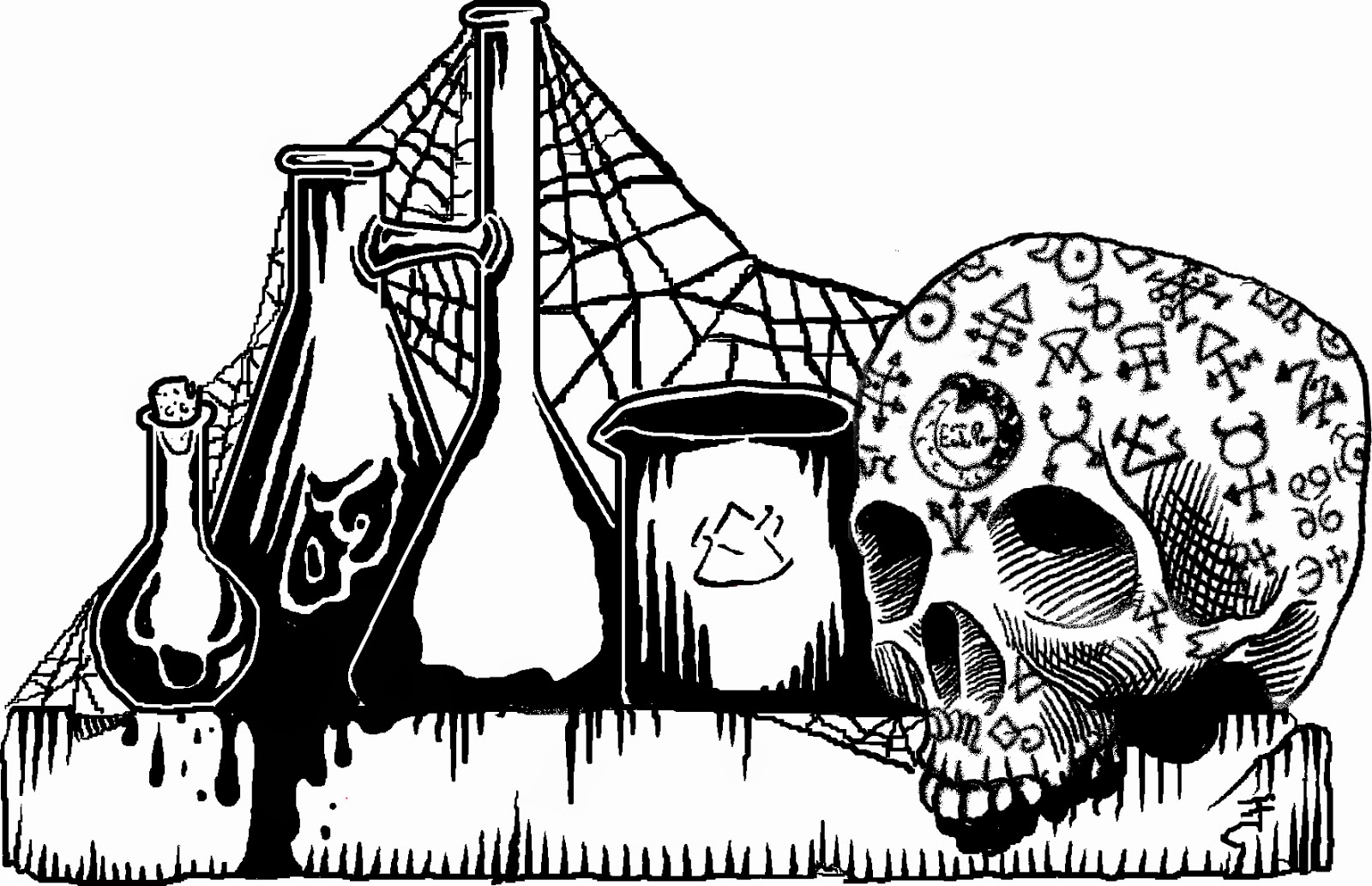 Potions are another standard type of magic item in fantasy RPGs. While they were not described in the 5th edition T&T rules, they did crop up in various published solo adventures and GM adventures. Potions were included in the Treasure Generator in the T&T 7th edition rules, although they were rather simple. The majority of these potions acted to permanently increase one attribute by 1D6 points. These are certainly useful (especially since level is tied to attribute values), but not quite as entertaining as other effects.

A more typical, and in many ways more useful (for characters at least), approach is to imbue potions with the power of certain spells. Potions are great substitutes for spells. Even if your Wizard is out of power, if he has a few potions on hand, you could still pull it out of the fire. But what makes them really special is that they can be used by any character type. Potions give Warriors a chance to play with magic.

Certainly not all spells in T&T would make good potions, but there are a number that are perfect for them. Poor Baby is a no-brainer; what delving party could not use a case of healing potions. The same is true of Healing Feeling, Too Bad Toxin, Nefarious Necromancy, and Born Again (the most sought after and expensive one). Other good potions would be Cateyes, Oh There It Is, Hidey Hole, Little Feets, Fly Me, Shield Me,  Resist Magic, Second Sight, Imafrawg, Smaller is Smarter, Bigger is Better, and Blow You Too....

There are also a number spells that would make for good "potion traps" to spring on an unsuspecting delver or the unfortunate guinea pig of the party. Take That You Fiend could release a nice jolt to someones innards while Befuddle could create some chaos when your comrade suddenly comes at you with a knife. Potions imbued with Hold That Pose, Rock-a-Bye, Dum Dum, Death Spell #9 (a rough one), and Medusa are also good, nasty tricks to play on would-be plunderers.

But this is all pretty standard amongst fantasy RPGs. There are a few more twists I'd like to add to these concoctions to make them a little less tame and predictable.

Buying Potions
Potions can be purchased as well as found in mad wizard's towers and labyrinths. In small villages, local shaman brew pungent elixirs and in large cities Potion Masters may have large stores in the well-to-do neighborhoods. The price of these potions can be quite high, however, and they may not always work (see below). Making potions is tricky business. A good potion costs 200 gp per spell level. You may be able to find potions of lesser quality for around 100 gp per spell level, but this has risks (see below). The price of certain potions may also be adjusted based on the amount of power (i.e. WIZ) held by the potion. Poor Baby (a 2nd level spell), for example, heals one point of CON for every 2 WIZ expended. For 400 gp you would get a Poor Baby potion that heals 1 CON. A potion dealer may charge an additional 10 gp for each additional point of CON to be restored; a 5 CON Poor Baby potion would then cost 450 gp.

Drinking Potions
Seems straightforward right? Wrong. Magic is a fickle thing and sometimes potions are just not made right. If a potion is purchased from a reputable dealer, a Level 1 Saving Roll on Luck is needed to make sure the potion works as advertised. Any failed Saving Rolls (including fumbles) means the potion had no effect.

If you happen to have found a potion somewhere or purchased one from a questionable source, then a Luck Saving Roll at the level of the spell is required (for example, a Level 2 SR for a Poor Baby potion). After all, who knows how long that bottle was sitting on the shelf in that ruined temple. A failed Saving Roll means the potion had no effect. A fumbled Saving Roll, however, means the potion released some chaotic energy that has the effect of an Omniflex spell and all of the characters attributes are randomly rearranged. The character has one chance to avoid this by making a Wizardry Saving Roll at the spell level. Diabolical GMs may wish to customize the fumble effects of potions to match their intended use. A fumbled use of a Cateyes potion may render the imbiber blind for some period of time, Healing Feeling may cause some horrible disease, and Hidey Hole may cause the character's body to emit a bright light for all to see.

Making Potions
You can cut out the middle man with the Potion-Making (obviously) talent (INT-based). With this talent you will have the skills and knowledge necessary to acquire the ingredients and create potions. There are two ways to do this:

Copying a potion: This is a slightly easier method. If you already have a potion with a known effect, like Healing Feeling, you can study that potion to learn how it was made. In doing so the potion will be consumed, but you will have a much better chance of successfully making the same potion than if you were starting from nothing. Copying a potion requires a Potion Making Saving Roll at the spell level and materials costing 100 gp per spell level. In addition, a Luck or Charisma Saving Roll at the spell level is required to obtain the correct ingredients. Of course, when drinking the potion a L1SR on Luck is still required to make sure everything went according to plan. Once a potion has been successfully copied, meaning that it also works when consumed, that character may make the same potion again just as easily (no more copying required).

Making a new potion: If you wanted to make a potion without one to copy, things get more complicated. The Saving Rolls and cost to produce the potion are doubled (x2 spell level on Potion-Making and Luck or Charisma and 200 gp per spell level). Drinking a potion made in this manner requires a Luck Saving Roll at the spell level with the fumble effect described above. Once the potion has been successfully made and worked when consumed, however, the potion can be made again as if it were being copied.
Posted by Dan at 5:30 PM