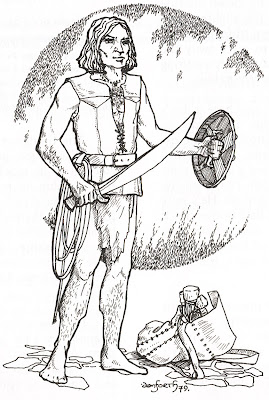 At first I had not considered this as part of the 'Evolution' series of posts, but my last post on Attributes led me to compare the sample characters provided in the attributes section of each T&T rulebook. This was a pretty simple task as there are only three different sample characters from the 1st, 4th, 5th, 7th, and 7.5 edition rulebooks.

The 1st and 4th editions contain the same, very simple, sample warrior named 'Furd the Unquenchable.' This sample character is not very well developed and is not described in any detail or really used to explain any of the character concepts with the exception of weight allowances. Furd is given values for his six Prime Attributes and some starting gold. What is noteworthy about Furd is that while he has two decent attributes the others are unremarkable if not poor.

This is a good demonstration that not all characters are going to be "supermen" with all attributes above 13. Furd has some strengths, but also some significant weaknesses. It looks like Ken just rolled the dice and wrote down the numbers for his sample character. Furd clearly demonstrates what Ken expects players characters to be in his game.

The 5th editions rules feature the unforgettable 'Fang the Delectable' depicted above. Fang is probably my favorite sample character of any RPG rules. Fang is not only used to clearly explain every step of the character creation process from rolling attributes to buying equipment, he is actually developed as an individual with his own personality. 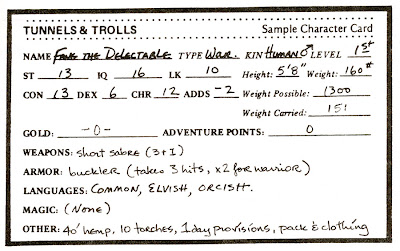 Fang's character card is filled in from start to finish. He is given a name, type, kin, and level as each is explained in turn. As usual, the sample character is a warrior since these tend to be the easiest to discuss. Fang then has his six attributes rolled up. Each attribute is explained as well as the meaning of some of the values rolled for Fang. Once again, the sample character is not very remarkable. In fact, Fang has a dexterity of 6 and is described as:

"...a real klutz, very clumsy, so much so that he actually hinders himself in combat."

Fang does have some redeeming features, however. He has decent strength and constitution and an exceptional intelligence. He'd have made a great wizard if only he weren't so clumsy. Next, Fang's personal adds are calculated. Fang has a stunning -2 Adds because of his low dexterity. That is not a good sign for his new career choice.

The real charm of Fang comes from the Equipping Characters section. While this is often a throw-away section with little discussion in most rulebooks, in 5th edition T&T we are taken through the entire experience of equipping Fang. Unfortunately for Fang, his bad luck continues when rolling for starting money and he only gets 80 gp to spend. The first thing Fang does is purchase some general supplies; I find this interesting because it is generally what I do last when equipping a character. This points to the importance of general equipment to Ken. Fang gets some clothing and a pack, provisions, torches, and rope. I enjoy the description of the 'Warm, dry clothing' as being clothes "suitable to climbing down narrow cave-like passages" and offering "protection from the damp chill of deep tunnels" especially when looking at Liz Danforth's illustration of Fang (above). Fang does not look like he'll be that warm. Next Fang goes shopping for a weapon. Here is where his personality starts to appear. Fang goes looking for a spear or sword, but his clumsiness and lack of funds prove to be problem. His best bet is a bludgeon, but

"Fang's pride can't stand it - a club is no weapon for a warrior."

So Fang shells out 40 gp for a short saber rather than 15 gp for a bludgeon; in return he gets 1 more weapon add. With only 14 gp to spend, Fang is only able to get a buckler for defense and no body armor. In the end he can't even buy himself a decent pair of boots.

After Fang the Delectable is completed we get the final words from Ken:

"Fang is no great hero material, perhaps, but his life or death would depend on what dangers he faces, and how well the player ran him."

This is a very important statement in my mind. Any character can be worthwhile to run, even one as flawed as Fang. It's all about the player.

Unfortunately, the 7th edition slips back into another forgettable character named 'Grimor Ironfang.' He even lacks the appellation of the previous characters, something that I was not happy with at all. Although this character is used to better illustrate the mechanics of character creation than Furd, he just does not have the personality of Fang. In the case of Grimor, however, the relative meaning of all of the attributes are discussed unlike Fang. What is also worth noting is that like the previous sample characters, Grimor also has weaknesses:

Grimor is not that lucky or smart; that is potentially fatal for a delver (especially the unlucky part). But Grimor is rather strong, agile, and quite fast; good attributes for a warrior. These strengths and weaknesses would hopefully balance out and Grimor could avoid letting luck or brains decide his fate; at least until he could improve them. Another note is that there is a typo in Grimor's character sheet in the 7th and 7.5 rulebooks; his Speed is recorded as a 6 but is described in the text and used to calculate his Personal Adds as a 16. I've wondered which was the mistake.

So what do these three different sample characters say about Tunnels and Trolls? The fate of a character is decided by the player, not necessarily the die rolls. Even a character with some terrible attributes can be fun to play and they often have the best personalities. Tunnels and Trolls is not about invincible heroes crushing every obstacle in sight. It's about overcoming those obstacles using the abilities you have and overcoming inherent weaknesses. This is definitely in keeping with the 'Old School' thoughts on FRPGs and I'm glad that this has not changed in T&T over the last 30+ years. Besides, what's the point of surviving and improving a character that is already superior in every way?
Posted by Dan at 3:43 PM

Labels: Evolution of T and T