I have not posted a new Lone Delver image since June. That poor guy's been trapped in the pit for a while. I wonder if he's alright (pokes him with a stick). Hmmm. Probably not. Oh well, here's his replacement. 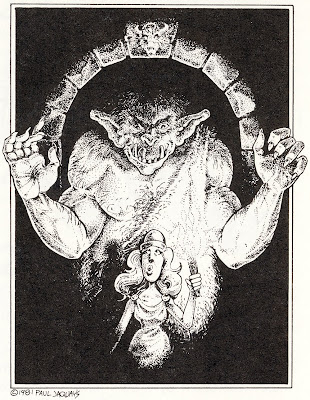 The Lone Delver for this month is by Paul Jacqays and appeared in the classic Flying Buffalo solo Blue Frog Tavern written by James Wilson. This illustration shows one of the major challenges faced by a lone delver; there is no one to watch your back. I also like the way the illustration shows the poor illumination provided by a single torch. There is a lot of darkness surrounding her and even the illuminated area is filled with shadows. Of course, that's not going to be much of a problem for very long.
Posted by Dan at 12:00 PM