Reasons I Love Tunnels and Trolls 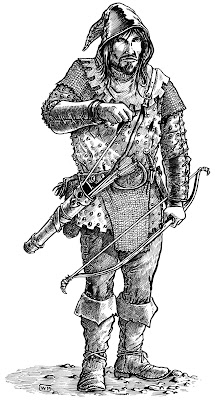 Ok, so there are a lot of reasons; enough to make this a regular series. But one of the reasons I love T&T is that the character pictured to the left could be a wizard. What do I mean by this? Flexibility of character types. I know the first thought you may have when you look at that picture is likely 'ranger' or 'thief.' but in T&T you have to be careful. The roles of the three basic character types (warrior, wizard, rogue) in T&T are not narrowly defined in the rules, meaning that players and referees are not constrained by excessively strict rules saying what every type of character can and cannot do. Wizards, for example, do not need to be feeble weaklings in robes and pointy hats that die as soon as something nasty so much as breathes on them. Wizards can carry a number of different weapons including very light bows and can wear any armor they can afford and have the strength to walk around in. Your wizard does not even need to be weak and easily killed. If you want a wizard with an 18 Constitution, you can have it. You want him to be armed with a foil and a main gauche; go for it. Couple that with a nice suit of armor and your wizard might be harder to kill than some warriors. A T&T wizard need not be a stranger to combat and certainly does not need to cower in the rear with the gear. But maybe you want a wizard that avoid combat and devotes all of his time to learning the arcane and honing his spellcraft. Guess what. You can have that too.

Of course this concept of flexible character types does not only apply to wizards, although it is the most extreme example of being able to break preconceived notions of character types in my opinion. Warriors are also very flexible and you can make whatever you want of them. No need for scores of warrior subtypes. Simply come up with a background of your own. May your warrior was raised in the woods, is very dextrous, and skilled with a bow. You can use that background to make a 'ranger' type without needing extra rules. If your party happens to run out of supplies in the middle of the woods, your warrior's background should allow for a Saving Roll to forage for edible plants and hunt animals more effectively than a city bred warrior.

Rogues are a whole other matter. Rogues are an open book. You can come up with whatever character concept that you like. Yes, I've previously stated that I never thought much of 5th edition rogues as defined in the rulebook, but that does not mean that they cannot be fun characters to play; especially once they get some experience under their belt and some spells. It's just my opinion. The rogue type gives you many options, that is the appeal to this type that I see. Until you play 7th edition, that is, get the Roguery talent and start kicking everyone's butt. At that point, casting spells may seem like an afterthought.

So, to recap: Tunnels and Trolls does not tell me that my wizard cannot wear a suit of mail and wield a sword or an axe.
Posted by Dan at 11:00 PM