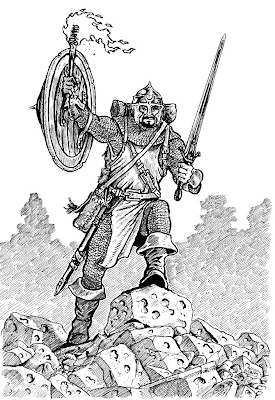 A new year already. I looked back over my goals for 2011 and saw that I did not meet my goal for the second year of The Lone Delver. Life just got a little too busy to exceed the number of posts from year 1; but life has been good. I do have many articles lined up for the coming year covering topics related to house rules, solo design, the evolution of the T&T rules, solo reviews, and my own solo run write-ups. Phineas the Red did not seen any action this last year having been replaced by Itash the Grim in my analysis of the survivability of Wizards in solo adventures. I rather like Itash and will certainly be using him some more. All I need now is a nice 7th edition rogue to add to my stable of characters.

As far as Lone Delver Games is concerned, I did release one new solo in 2011 although it was not the one I had planned to write; however, I really like Crypt of the Wolf Prince. This new solo is actually the start of a solo sandbox campaign, something I am pretty excited about. I will be producing a series of adventures all set in a huge ruined city outside of a small town named Cheapham. You will not need to play these solos in sequence or even all of them; it's entirely up to you. But you will be able to take a single character from adventure to adventure learning more about the ruins and their significance as you go. Ultimately I'd like to produce a campaign book on the ruins for use in GM-run adventures.

I plan on writing at least two new solos in 2012 including the spaghetti-fantasy, bounty hunting adventure I've mentioned previously and a second installment in the solo sandbox. I have a third sketched out as well, but we'll see how much time I really have. In addition, I am currently working on editing and layouts for two GM-adventures. The first will be released later this month. I am actually publishing these for another writer, something I'd like to do more of in the future. My T&T Combat House Rules book is still in the works, but it may take some more time to see the light of day; at the end of the day I'd rather write adventures than new rules.

Sales of my solos have happily continued on RPGnow and Lulu. The Temple of Issoth has been downloaded 876 times; again I'm that one for free but I'm still very happy about the level of interest.

I'm starting off with a post on the first day of the year so I'm hoping that is a good omen for achieving more of my T&T related goals this year. My thanks to everyone who has followed my blog, purchased and played my solos, and provided comments and support.
Posted by Dan at 10:00 PM