The Tome of Advanced Specialist Mages: A Review 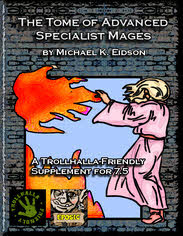 The Tome includes five new character types. There are three kinds of traditional spell-casting types called Advanced Spell Casting Specialists as well as two other types that use magic but do not use the standard T&T spell lists.

The Advanced Spell Casting Specialists include: 1) the Flex Mage that can use any attribute to power spells, 2) the Parasitic Mage that can draw Kremm from the Wizardry attribute of others (either voluntarily or involuntarily), and 3) the Themed Specialist Mage that can only cast a limited number of spells based on a specific theme chosen by the player. The first two Advanced Specialists obviously give the character more spell-casting power. There are also other interesting and very useful side effects to their abilities. Their chief drawback is that they start with only one first level spell and may not learn new spells from the Wizards Guild just like Rogues. The third type is my favorite and seems the most useful in solo play. Themed Specialist Mages get to choose any five spells of any level from the T&T spell lists to start with regardless of the Intelligence and Dexterity requirements. The only stipulation is that the Theme Mage must have enough Wizardry to cast that spell at it's base cost. This presents a lot of room for creativity and grants starting characters some rather potent magic since many high-level spells have low Wizardry costs. The only drawback is that the Theme Mage will never be able to cast another spell outside the starting five. Mike provides fifteen examples of Theme Mages that provide a good overview of the possibilities including: The Dark Flames Mage, The Dominant Force, The Healing Hand, and The Summoner.

The second new Specialist described is the Kremm Warrior. Kremm Warriors are an interesting mix of warrior and wizard. They are not spell casters but instead create items such as weapons, armor, and even miscellaneous equipment by using WIZ. These items are referred to as Kremm Items. Kremm Warriors can make as many of these Kremm items as they have the WIZ to generate instantly. This means that a Kremm Warrior could be walking through the woods in his underwear when suddenly three goblins spring out from behind a tree wielding daggers and demanding gold or blood. The next moment the Kremm Warrior is encased in a shimmering suit of plate armor and wielding a sword and shield. The goblins subsequently crap themselves and run. A major limitation of Kremm Warriors is that they get limited use of normal, material items made of iron, steel, wood, leather, etc. This is reflected by a reduction in the dice and adds of normal and magical material weapons, a reduction in the hits taken by normal and magical material armor, and an overall reduction in the amount of material equipment a Kremm Warrior can carry (i.e. reduced weight capacity). The Kremm Warrior description takes up the most pages of any of the new character types included in the book primarily due to it's completely unique nature.

The Tome of Advanced Specialist Mages is an excellent set of rules for new character types. Most importantly, the writing is clear and concise making even the most complex of the new types easy to roll up and play in very little time. If you are interested in adding new character types to your T&T GM or solo games you should definitely pick up a copy. If you are satisfied with those types given in the published rules, then this book might not be for you. There are plenty of ideas in there, however, and you could easily use them to make your own house rules for standard Wizards and Rogues.

You can get a pdf copy of The Tome of Advanced Specialist Mages at RPGnow for only $2.99. The download consists of three files including a file designed to be viewed on an e-reader device.
Posted by Dan at 5:26 PM