A Fragmentary History of Trollworld: A Review 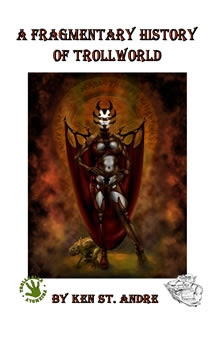 Ok, so I've had an autographed copy of A Fragmentary History of Trollworld on my shelf since October 2010, but I have not gotten around to reading it from cover to cover until recently. Given the things I learned about Ken St. Andre's personal Tunnels and Trolls setting, I regret that delay.

There have been many comments about needing a unified setting for T&T similar to that other game; well here it is in one small volume. The world is simply called Trollworld. But keep in mind that this is a Ken St. Andre style presentation. It is far from complete, but instead presents a general history of the major event in his world over a span of over 100,000 years. Rather impressive in my opinion.

The history is presented as a series of events, some linked some not, some involving important figures in the history or Trollworld, given year by year. Some of the events are only a few years apart while others are separated by thousands.

There is quite a bit of interesting information unique to Trollworld that I learned in my reading. Here are just a handful that grabbed my attention:

1. Trolls were the first sentient beings on Trollworld.

2. Elves and dragons arrived on Trollworld at the same time through dimensional gates. The elves were fleeing the destruction of their world by dragons. The dragons followed.

3. Wizards with god-like powers enter Trollworld through the same gates many bringing their own servant kindred including humans and dwarves.

4. Dwarves were created by one of these wizard gods from stone.

5. The Wizard Wars, which last for about 45,000 years (!!), involve many of these wizard-gods with most of the destruction being laid against their servant kingdoms.

The series of events provides a nice framework for setting individual adventures or entire campaigns anywhere within this history. You could set your campaign at the end of the chronology; it is certainly a chaotic time and ripe for adventure (you'll just have to read about it to see). But you could have your characters engaged in the Wizard Wars 52,000 years earlier. You could place your adventure in a time before dwarves or humans even arrived on Trollworld. You could even start a game in the dim past when elves and dragons first passed through the dimensional gates. There are boundless possibilities.

1. Trolls are actually shape shifters. The did not take on humanoid forms until after the arrival of the elves and dragons (and their eventual war with both).

2. Elves are intolerant of iron; most elf adventurers who generally have some sort of iron in their presence are actually half elves.

3. Dwarves were carved from stone and brought to life by the wizard-god Gristlegrim. The new born, but fully grown, dwarves were then educated by beings from, of all places, Earth.


The layout of A Fragmentary History is well done, even if the text is a little small. You should certainly read this one in a well-lit room. The book is well-illustrated by David Ullery, Garen Ewing, Chad Thorson, and Robin Stacey and features some illustrations that you may recognize, but the majority are new.

The only thing I felt was missing from the book were maps. There is a map included with the 7.5 edition boxed set of Tunnels and Trolls but I certainly would have liked to have had a map included in the book that I could refer to whenever specific places were mentioned. Just a thought for future editions.

Overall, A Fragmentary History of Trollworld is quite good and I recommend it to any T&T fan. The book provides a nice framework for campaigns in the world of Ken St. Andre, just as long as you are willing to provide your own details. Remember, it is not a fully fleshed out campaign world, but it provides the seeds to develop many of them.

A Fragmentary History is sold by Peryton Publishing as is available as a pdf for $5 through RPGnow. You can also get a hard copy for around $12 from Peryton's Lulu store.