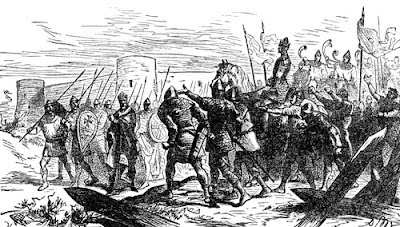 After reading A Fragmentary History of Trollworld I came up with a seed of a campaign idea that I rather like and plan on developing further.

The campaign starts with the characters first entering Trollworld through a dimensional gate as humans (or possibly other kin) in the service of the Wizard Kalban Adamto at 15,000 B.K. Talk about awe and wonder. This campaign provides the players with an entirely alien world to explore; basically a sword-and-planet style adventure set in the dim past of Trollworld. The character will have no knowledge of the world they are thrust into or the beings that inhabit it and will be charged with establishing a kingdom for Kalban Adamto. Establishing this new, and hopefully secure, home should be the driving motivation for the characters.

This is an idea I really like because it has the potential to make use of my favorite character kindred, humans, in a major way. The majority of the players will obviously need to be human (2/3 or 3/4). There could be hobbs or leprechauns as well, but a player choosing one of these kin would need to have a good explanation as to how they came into the service of the wizard. Elves and dwarves are out; these are just two of the alien beings that inhabit Trollworld. The characters will eventually encounter these kindred and will likely be at odds with them as they try to carve out a new territory. This campaign could also make good use of my revised citizen type. After all, a colonizing force needs more than warriors and wizard. Specialists of all types will be required to conquer the new world and the players will be forced to use more than swords and spells.

The range of possible adventures to be had in this campaign is fairly unlimited. My idea is that the human colonists arrive in a remote part of the Dragon Continent. They would then start trying to tame the surrounding wilderness facing wild animals and monsters, discovering ancient ruins, and eventually dealing with first contacts with the various intelligent kindred who may or may not be hostile to their presence. From there, a range of adventures are possible involving diplomacy, espionage, guerrilla activity, or even open warfare.

There is still a lot to think about and many details to fill in, but it is a campaign I would enjoy playing in and running. As the pieces start to come together I will post them here with published material coming later.
Posted by Dan at 1:46 PM