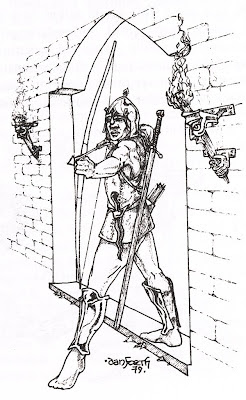 Here is yet another classic Lone Delver courtesy of the talented Liz Danforth from the 5th edition of the Tunnels and Trolls rules.

There are several reasons that I like this illustration. I'll number them so that I can keep them all straight:

1. He's armed to the teeth. He has a long bow, a two-handed broadsword, and a magic-negating kris dagger. A good lone delver always has a variety of weapons to deal with unexpected situations. This delver is well-prepared.

2. Despite all of those weapons he's not very well armored. He has a helm, greaves, and a leather jerkin, but that's all. He must have great confidence in his skill and agility to keep him from harm; however he is smart enough to protect his head. Of course he may have also spent most of his money on all of those weapons leaving none for good armor.

3. He's barefoot. This could have simply been an oversight at the market, but perhaps there's a better story there. Maybe he stepped in a pool of toxic slime or highly corrosive acid that forced him to leave his boots behind. Or maybe it was something a bit more benign yet no less horrifying; a heap of dragon dung perhaps?

4. He has a bow with an arrow drawn and ready as he enters the room. How many solo delvers think of doing this? The use of missile weapons at the start of an encounter are typically not mentioned in solo adventures, but there is no reason that you cannot house rule this sort of tactic. Given that longbow, this delver could likely slay an opponent with a single shot. The obvious problem would be light, but denizens of this place were kind enough to provide torches.

5. The torches. Nicely detailed sconces with hands clutching the torch and a frame that has the appearance of a face. But could they actually be talking? Maybe they are enchanted and shout "INTRUDER!" as the delver enters warning who or whatever dwells within? It's a good thing the delver has that bow ready.
Posted by Dan at 11:46 PM