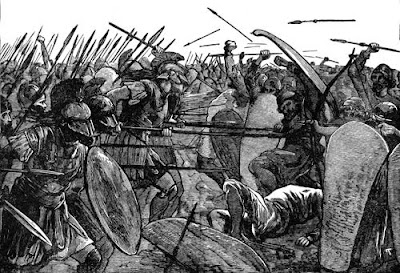 Illustrations of large-scale historical battles are abundant on public domain art websites. Most are depictions of famous battles in Greek and Roman history. However, there are a number of illustrations of battles fought during the crusades, in particular sieges. Many of these illustrations are quite good even if they are not exactly historically accurate. The one shown above is one of my favorites, depicting the Spartan phalanx engaging the Persian light infantry. It puts you right in the middle of the battle and demonstrates the chaos and ferocity of ancient warfare. How many of us could charge a row of armored soldiers with six-foot spears pointed at us?

Looking through these illustrations, I wonder how a solitaire adventure with a large battle as the focal point would run? The character could either be a soldier in the rank and file or an officer. This would make for two very different adventures. The soldier would have to fight for his life and the lives of his comrades, decide whether or not to follow the orders given to him by his superiors, and withstand the chaos of combat. The officer would be in charge of a group of soldiers, responsible for leading them effectively and defeating the enemy. Either way, the player would need to make many life or death decisions for himself and potentially others as well as fight with sword, spear, an 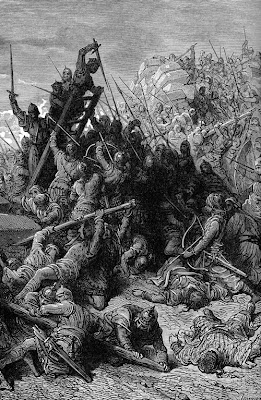 d axe. However, a field battle may be too open ended for an effective adventure. There would be few choices except to either fight those in front of you or retreat.

While an open field battle may not be an ideal setting for a solo adventure, a siege certainly would be. Once the character's army has breached the enemies walls (which would by no means be a certain outcome) the adventure almost becomes a dungeon crawl. The player must make his way from the breach to the interior of the keep. He must choose which way to turn; fight through streets, doorways, buildings, and corridors; decide whether to stop and loot or press the attack (ok, that may be a bit dark). Choices make the adventure; the more the better (a subject for a later post). A siege would certainly provide a lot of options and would be a good change from crawling through damp tunnels and ruins. 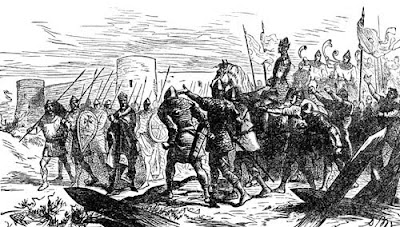 (All images obtained from Karen's Whimsy.)