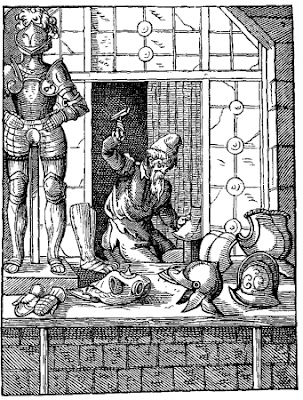 Once your character has plundered enough gold to buy a nice suit of armor, you are ready to take on hordes of monsters without worry for as long as he or she lives. Right? Wrong. Armor takes damage so you don't have to. As I mentioned in my last post, I was in the Society for Creative Anachronisms. After most fighter practices, I would have to spend time repairing my armor; and that's just after being hit by rattan weapons. What would real swords, spears, and axes do to a suit of metal, leather, or cloth armor?

In the first and fourth editions of Tunnels and Trolls armor was entirely ablative. The value of armor was that it took hits instead of your CON. When your armor took as many hits as it was able, it was destroyed. This is a little extreme in my opinion. Not every hit to a suit of armor causes catastrophic damage; but some will cut straps, slash leather, break mail links, or puncture steel plates. In some house rules, armor could be 'burned' by warriors whenever they chose to use their armor doubling ability. This tempers the destruction a little, since a warrior chooses when to sacrifice his armor to major hits. But of course, rogues and wizards never lose their armor protection, nor do warriors who do not choose to double their protection.

My own house rule for armor degradation affects all character types and is the result of being dealt more damage than your armor can deflect. Any time a character takes more hits than can be absorbed by body armor or a shield and loses CON, the armor or shield is degraded by one point. Spite damage is the exception to this rule. This assumes that the sword thrust or axe blow cut through your protection and hit flesh. Those excess hits represent major damage to your armor. If you are wearing a full suit of armor, simply subtract 1 from the total hits taken. If you are wearing pieces of armor, then the player gets to choose which piece takes the hit unless it was a targeted attack (see my post below). Shields may be sacrificed instead of body armor.

Of course, characters won't just hang onto their damaged armor until it finally falls apart. Damage can be repaired. New mail links can be added, rivets replaced, dents beaten out, leather and cloth restitched. Armor and shield repair can be a talent in the 7.x rules, allowing characters to make a SR to try to repair their damaged armor if they have the appropriate supplies. A SR failure would mean that the armor or shield loses another hit of protection (that happened a few times after a fighter practice when trying to replace one rivet caused two or three other to pop out). Characters may also take their armor to an armorer for repair. To repair each hit would cost 10% of the armors total value.

Armor degradation adds a bit more flavor to T&T combat and adventure. That warrior wearing a full suit of mail armor and carrying a kite shield can take a lot of hits without getting injured (12 + 6 * 2 = 36), but not forever. Eventually that nice suit of mail will take damage and it's protection will decrease. Soon that stout warrior who was always charging to the front lines may find himself lurking closer to the rear.

Damaged armor also gives characters something to do with all of the hard-earned loot they pull out of ruined temples, haunted crypts, and ancient castles. Armor is not a one-time investment. Sure you just dropped 500 gold coins on a suit of plate armor, but soon you'll have to pay to have it repaired and eventually replaced. Well, that's the life of a delver. Why else would you go back into that crypt to face those zombies again?