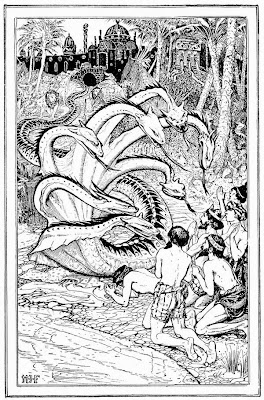 Beasts of great strength and power exist in the mythology of every culture. These are the monsters of legend: the Lernaean Hydra, Grendel, the Minotaur of Crete, Cerebus, Scylla, Medusa, the Chimera, Huwawa, Fafnir, Black Annis. They strike fear in the hearts of even the bravest men and women. They terrorize, raze, burn, plunder and, most importantly, kill would-be heroes seeking fame and fortune. Some come to be masters of or even worshiped by their victims, receiving tribute and sacrifices in return for their "protection."

There are some great sources out there for researching legendary monsters or finding inspiration for creating some of your own. Two good ones that I found are the Monstropedia and Mythical Creatures List.

What makes these monsters special? They are certainly not the run-of-the-mill fodder that you encounter in most adventures. These monsters are unique. Once they are defeated, they are gone from the world forever. To become such a monster of legend requires great abilities, whether it is brute strength, fearsome magic, divine or demonic power, horrible mutations, or a unimaginable combination of all of these traits. These are not adversaries to be taken lightly. To face one invites certain death or worse. Of course, defeating such monsters brings instant fame and most have acquired massive hoards of unthinkable wealth (see Fafnir), so for all of the risk there is certainly significant reward.

Legendary monsters in T&T, therefore, require more than just a Monster Rating, they need their own set of attributes, many special abilities, and definitely a history. In designing a monster of this magnitude one must be careful to make it powerful, but not overly powerful. They should be capable of being defeated since most are defeated in the myths in which they appear. Of course the means of their downfall does not have to be through force or arms or magical attack; guile and deceit are powerful weapons as well (just ask Odysseus).

Here is an example of a less well-known creature of legend from Sumerian mythology, Huwawa: 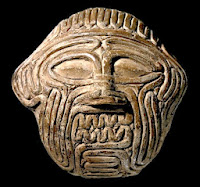 Huwawa has keen hearing, and is very rarely surprised. Huwawa favored attack is to breath fire upon his victims. If faced with a great opponent, he can kill with a single roar. In hand-to-hand combat, Huwawa uses his claws, talons, teeth, and horns to great effect.

Huwawa is a creature of strength and magical power. But he is not overly intelligent; his final downfall at the hands of Gilgamesh and Enkidu (Epic of Gilgamesh) was largely the result of trickery.


I like the concept of adventures built around the goal of defeating a single, powerful monster. No random goblins, zombies, giant spiders, or jellies scattered about a tunnel complex. There is a creature of legend that must be faced and defeated or at the very least driven off to go bother someone else.

The key to an adventure like this would be creating the appropriate atmosphere and anxiety. There should be a very likely chance of defeat and death for some, if not all, of the characters undertaking such a deed. But there would be great reward if successful, both in fame and treasure. The players should be provided with enough information up front to know that they should not just go charging in and try to defeat the monster by going toe-to-toe, rolling a bunch of D6s, and hope for the best. If the monster breathes fire, that should be common knowledge. If it can kill a man by wiggling it's little finger, let them know. At this point the players should realize that they need information and a good plan. So a large part of the adventure should involve these important steps. They can talk to the locals, visit ruined farms or villages, even scout out the lair of the beast. Armed with this knowledge the players can devise a cunning plan, playing on any weaknesses they think they have discovered. Executing the plan will obviously be the exciting part, and maintaining the tension should not be too difficult here. It's important not to pull any punches (in my opinion). If it's a good plan, it should have a chance of succeeding, but that does not mean it has to and certainly does not mean every character is going to survive. Defeating the monster should be tough, so that if it happens it feels like a real achievement. The rewards that come after could be another adventure. What and where is the monsters treasure? How do the characters secure it and keep it? What kind of party do the locals have in store for them? Is there a price to be paid for defeating such a monster, especially if it was created by a god? While an unsuccessful encounter can be viewed as a failure, it can also lead to further adventures. How do the remaining characters get away? What does the monster do next? How do the locals react?

These effects are likely best achieved in a GM adventure, but the same could also be done in a solo adventure, although it would certainly be more difficult. I'm going to try my hand at both. The GM adventure will be a switch for me, but if I'm happy with the results I'll publish it through Lone Delver Games. The solo will a short one (20-30 paragraphs) and I'll post it here for free when it is done.