Weapons and Armor in dT&T 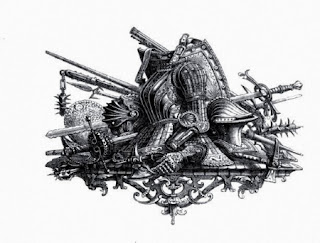 In a post at the Outer Sanctum of Trollhalla, Ken St. Andre has written up some Q&A on the role of weapons in Trollworld in the Deluxe Tunnels & Trolls rules. In this article, Ken describes who makes weapons, where they can be found, and how easily they can be acquired by needy delvers.

An interesting comment by Ken was that his current thinking is that that players should be able to outfit their starting characters with any basic weapons and armor they wish to without worrying about their cost. His rationale is that the characters have already been living and adventuring for some time and would therefore be pretty well outfitted. The players simply need to come up with a story to explain how they acquired all of their gear.

While I think this can be a great way to start up a quick game (i.e., everyone gets scale armor, a broadsword, a spear, and a target shield, go!), and certainly would not have any negative impact on the game, I've always liked the idea of rolling dice for money to see exactly what my character can start with. To me this is just another randomized attribute. Sure every character should start with some equipment. I never assume that the character starts off with a bag of gold and then goes to the mega-mall to buy all of the things he or she needs for a new start as an adventurer. These are the items the delver has acquired over his life so far. How much the delver has varies from person to person. This status or history of the delver is partially determined by the roll of 3D6 to determine starting gold. If the delver has done well, he may start with 180 gold pieces (or more if using TARO) worth of equipment. If his life has been harder, maybe having recently been robbed on the road, he may only have 40 gold pieces worth of gear.

Take the example of Frederick Halfacre. In my vision of the character, he started off very poor. He had some great attributes, but had little in the way of gear because he was the son of a destitute farmer.

So, if the player rolled 3D6 for gold and suddenly sat facing a 4, that really helps to define the characters story.

But what can you do with 40 gold pieces? Can the character survive? Certainly. Here is an example of the gear a player may choose with that small amount of money:

Can this character make it? With the right starting attributes and maybe a few friends, absolutely. That is a decent set of equipment. Would most players choose to equip their new character this way if given unlimited funds? Probably not. But that's the point and it adds some extra flavor to the game. He can quickly improve his situation by surviving just a single delve. Taking the weapons of your fallen foes is the best way to get some nice new gear. I've often had the most fun playing characters that start off with very little.

Overall I like the idea of some characters starting off with a lot of nice weapons and armor and some, not so much. If every character gets to start with a large array of gear, then I feel that something is lost and it loses it's value. The best way to maintain this variability, and provide players options, is the starting gold roll.
Posted by Dan at 8:40 PM