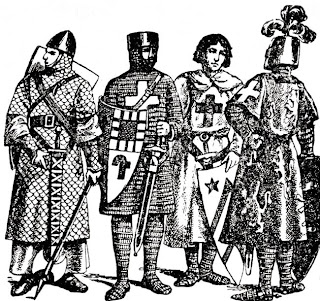 There has always been discussion about making T&T classless, moving instead to a skill-based system. But in my mind T&T has always has been "classless". There are basic Types that are chosen when creating a character, warrior, wizard, and rogue, that help define the training your character has received in weapons and magic. Unlike strict Classes, however, magic is not necessarily limited to a small select set of types and neither are weapons and armor. Rogues represent a mix of both abilities while Wizards still get to use a nice variety of weapons and armor. Warriors obviously get left out of the magic game completely. There are no other abilities described for the Types other than their abilities to wield magic and weapons. Therefore, outside of weapon and magic use you are free to make your character whatever you want.

Instead of basing abilities on a predefined class, your characters basic abilities are defined by their attributes. Your characters can do pretty much anything you want simply by making a Saving Roll on an attribute that corresponds to the action. You can make up a back story to help explain why your character might be able to walk a tight rope, scale a sheer cliff, or decipher a set of complex runes, but in the end your character's ability is based on the attribute and not the Type. These attributes can be quite variable between characters of a single Type and are increased with the acquisition of Adventure Points as the player sees fit. This gives the player the flexibility to mold his or her character in any way. If you want a really smart Warrior capable of solving complex problems you can invest in Intelligence. If you want a Wizard that is good at gambling, you can have that too by investing in Luck.

The addition of Talents in 7th edition took this concept one step further. Talents provide a special advantage to characters based upon some ability or training outside of the standard Type. So you could have three beginning Warriors each choosing a different Talent, perhaps Tracking, Thievery, and Persuasion. All three characters are Warriors with the same abilities with weapons and armor, but each brings something different to the table with their unique Talents. They have been further refined so that they are more than just sword-swinging roustabouts. One is a ranger, the other a thief, and the third may be a priest. As these Warriors gain experience, their attributes will increase and they may acquire new talents to either support their original talent (perhaps acrobatics, hunting, and singing, respectively) or go in some new direction (dancing?).

In this way T&T is truly classless. Types are not restrictive of character abilities and with the addition of talents, players are free to craft their character however they see fit. I am glad to hear that Talents will remain a part of dT&T, even if only part of an Elaborations section. In my opinion Talents added an important element missing from the 5th edition rules.