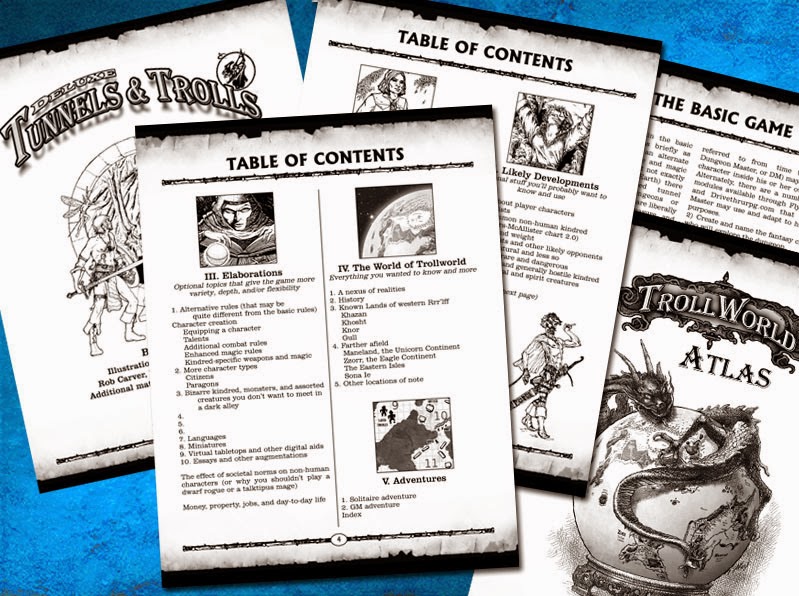 A sneak preview of the Table of Contents for the Deluxe Tunnels & Trolls rulebook was released back in March through the Deluxe T&T website. It was described as being mostly complete, but with the possibility of changes as needs arise.


The Basic or Core Game: What you need to play

Elaborations: Optional topics that give the game more variety, depth, and/or flexibility

The World of Trollworld: Everything we can tell you

1. A Nexus of Realities
2. Trollworld’s History and Timeline
3. Major Continents and Regions
3.1 Rrr’lff, the Dragon Continent
3.2 Zorr, the Eagle Continent
3.3 The Mane Land Continent
3.4 The Land of Sona Ie
3.5 The Eastern Isles
3.6 The Farlands, the Newlands, and the Backlands
4. Prominent Locations of Rrr’lff
4.1 Khazan
4.2 Khosht
4.3 Knor
4.4 Phoron and Gull
5. Other locations of note
6. An Extended Bestiary of Trollworld
6.1 Beasts: natural and less so
6.2 Monsters: common, rare, and usually dangerous
6.3 Intelligent and sometimes hostile kindred
6.4 Supernatural and spirit creatures

On initial inspection I like that the rules have been divided into "Core Rules" and and "Elaborations" section just like the venerable 5th edition rulebook. This was something that was requested by a lot of backers and was certainly a major strength of the organization of the 5th edition rules in comparison to the 7th edition.

The Core section includes rules for character creation, saving rolls, monsters, combat, magic, equipment, and GM  information ("putting it all together"). Of special note, Talents are still in from the 7th edition rules, rules for berserk fighting are back in from 5th edition (and earlier), and there are rules for inflicting stun damage.

The Elaborations section contains an interesting assemblage of subjects, many from the 5th edition rules. Interestingly, Citizens and Paragons (aka Warrior-Wizards) have been moved out of the Core rules and made optional. Citizens I can understand being moved as they received a rather mixed reception from T&T fans (I like the Citizen type myself), but Warrior-Wizards have been part of T&T from the start. Equipping characters is also in the Elaborations section. This was explained by Ken at Trollhalla where he stated costs for equipment including weapons and armor would not be included in the core rules. Instead players (or GMs) are allowed to select the gear they deem appropriate for the character without worrying about rolling for gold and going shopping (this method is now an elaboration). I'm a little on the fence on this change since I like the idea of rolling for gold as I said in an older post. I'm also curious to see what the additional combat rules and enhanced magic rules turn out to include.

Following the Elaborations sections, there is the "World of Trollworld" section providing all of the information on the campaign setting of Ken St. Andre. This is the part of the new rulebook that I am really looking forward to. These aspects of Ken's Trollworld have been hinted at, but never fully fleshed out in any supplements with the exception of timelines and brief histories. Getting all of this information and the maps should be fun.

At the end of the book are two adventures, the first the classic solo Abyss and the second a new GM adventure Adventures in Zorr. Having two adventures included in the book and ready to go is a nice addition. Abyss was an interesting choice for a solo since it requires a deceased character to play. I would have preferred to see a nice 1st level introductory solo in the vein of the classic Sword for Hire or Andy Holmes' online solo Eye of the Serpent; in other words a solo that could be used to help teach the rules to new players. I won't complain too much, however, as Abyss is a solo that has long been missing from my collection. Adventures in Zorr sounds like it will be at least similar if not the same as the one included in the dT&T free preview rules. Perhaps it will have been expanded and improved?

In all the preview of the Table of Contents make me hopeful for the new rules. The hand of Liz Danforth is evident in the organization and I am happy to see it after the more haphazardly organized 7th edition rules. The wait for dT&T seems to be coming to an end.
Posted by Dan at 1:28 AM