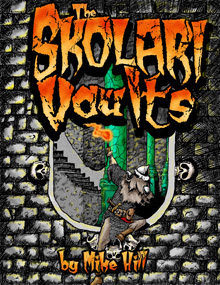 I have just released a new version of the T&T GM adventure Skolari Vaults: Levels 1 and 2 in cooperation with the author, Mike Hill (aka Hogscape), through my Lone Delver Games storefront at RPGnow. This is an amazing adventure featuring the first two levels of the inverted castle of a renegade Wizard's guild filled with goblins, orcs, undead, traps, and other nasty things. But hey, there's treasure to be found as well; powerful Wizards are never poor after all. The book features an original color cover and 15 original interior black and white illustrations by the talented Jeff Freels.

As with the prequel adventure, Dungeon of the Rat, all proceeds earned from the sale of Skolari Vaults will be donated to the JeffWerx Transplant Fund, which will go toward kidney transplants for Jeff Freels (aka Grumlahk) and his wife Raquel.

You can currently get a pdf copy for $5.00 from RPGnow, but hard copies will be available through my Lulu storefront soon.

Here are the details:


Long ago the mages of the Skolari Order left the Wizard’s Guild and established a fortress on the shores of the Gray Lake - the Skolari Vaults. The Guild, fearing the growing dark power of the Skolari, laid siege to the Vaults. At the battle’s climax, the Guild wizards uprooted the fortress, bore it aloft, and cast it into the ground upside down! The wizards then buried the ruin beneath tons of rock and soil entombing any survivors.

The years passed and the site of the battle became a grass-covered hill. While little of the Skolari is remembered, the solitary hill on the shore of the Gray Lake is rumored to be a cursed place of great peril. This, of course, draws brave but foolhardy delvers by the dozen. Yet the powerful magic that preserved the Vaults ensured that some of the Skolari survived. Others, drawn by the evil power of the fallen wizards, lie in wait for those that dare to enter...THE SKOLARI VAULTS.

This book is a Game Master-run adventure that includes detailed descriptions and maps to the first two levels of the Skolari Vaults. The Skolari Vaults is suited for a party of four to six first to third level characters with a combined total of 20 to 40 personal adds. A good mix of character types is recommended with at least one wizard and one rogue in the group.

The Skolari Vaults is designed for use with Ken St. Andre’s Tunnels & Trolls™ game system. You will need a copy of the T&T™ rules to play this game.

Special Note: All proceeds earned from the sale of The Skolari Vaults will be donated to the Jeff and Raquel Freels Transplant Fund (http://jeffwerx.com/tf.html). Jeff is a great friend and contributor to the Tunnels & Trolls™ community. Both he and his wife are in need of kidney transplants. Jeff contributed the cover and all of the interior art for this adventure.