City of Terrors for dT&T Released! 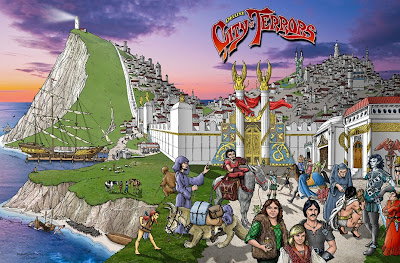 That's right, the classic solo City of Terrors by Mike Stackpole has been released in pdf at RPGNow for a mere $4.95. If you backed the Deluxe Tunnels & Trolls Kickstarter campaign, however, you should have gotten it for free. The solo has been revised so that it is compatible with dT&T rules and is available in pdf for the first time. The adventure has been lengthened a bit (6 new paragraphs) and some new art was added. Of course there is the "new" cover as well. The original (and amazing) black and white cover by Liz Danforth was revised and digitally painted giving you glimpse of Gull and some of the characters you may encounter within it's walls as well as some of the key figures in the development of the solo. The interior art is still a wonder, featuring classics by Rob Carver and Liz Danforth.

This is truly one of the most interesting solos published by Flying Buffalo back in the 1980s. Set in the deadly city of Gull, you can engage in 23 different adventures in an urban environment. There's everything from battling orcs to space aliens. This is not an adventure for starting characters, however. As the description says you can have a maximum of 275 adds; you will need them. If your character does happen to die on the streets of Gull, there is an adventure that gives you a second chance, if you remember how to get to it (see the Introduction for details). City of Terrors is a "must have" and a "must play" for fans of T&T. It's also a nice way to introduce a new player to the potentials of the game.

Here are the details from the Flying Buffalo storefront at RPGNow:

The deluxe outdoor adventure in the city of Gull, on the sun-baked isle of Phoron. Meet strange denizens and dangerous foes in this massive solitaire adventure for Deluxe Tunnels & Trolls. Can you uncover the secret that is lurking in the shadows, as you fight for survival in in the streets and buildings of Gull? This longer Deluxe edition of City of Terrors has been updated by Ken St. Andre to be compatible with the new Deluxe Tunnels & Trolls rpg and includes additional options for players and new art, including a gorgeous new color version of the classic Liz Danforth/Rob Carver cover digitally painted by Steve Crompton. For one character of any type, up to 275 adds.