There have been some updates on the upcoming T&T Deluxe edition, some old, some new.

The first is a pretty interesting alteration of the rules for spell casting from the more recent 7th edition. There will no longer be a Saving Roll required to cast spells. This was of course the norm for the 5th edition and older rules (1975-2005). How did this change back to the original rule come about? Ken St. Andre asked T&T players which they preferred and an overwhelming majority preferred no required Saving Roll. Of course there is always the "house rule as wanted" caveat for those that like the newer rule.

A second piece of news is a preview of one of the items available to supporters of T&T Deluxe in the upcoming Kickstarter campaign: Trollworld coins. 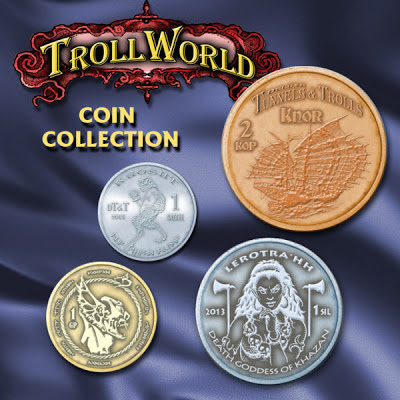 While these are simply prototypes of what is to come, they seem pretty nice and would make good props for group games.

There have also been a number of posts since November by Ken at the Outer Sanctum of Trollhalla detailing some of the sections of the rule book such as the various kindreds that players can use as characters:

What was missing from this list? Leprechauns. Leprechauns have been a staple PC option since 1e T&T back in 1975. Their absence from this list sparked a bit of an uproar in the T&T community. What happened? Ken added them back in:

I love that Ken is actually listening to the players of the game in this new edition and being so open in the design process.

Here are links to some other bits of the kindred rules that Ken has previewed: