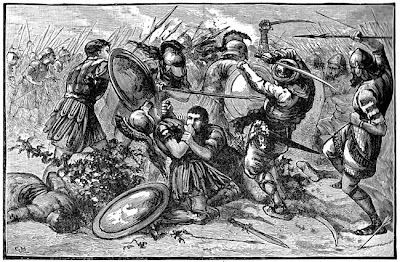 After looking through the 7th edition rules recently, I thought that a short review on the combat abilities of the different character types in 7th edition T&T would be a good thing to do.

Probably most important is that all character types may use any armor or shields as long as they have the required strength. As I've said before I love this about T&T. Go ahead and put your wizard in plate; in 7th edition you don't need to worry about plummeting Strength scores.

Here are the specific fighting abilities of the five standard types:

Citizens may use any weapon but fight with half of their normal personal adds.

Rogues may use any weapon with full personal adds.

Warriors may use any weapon with full personal adds, get +1 personal add per level, and receive double protection from armor and shields.

That's a nice range and progression of combat abilities between the types which, while it clearly favors a few, allows all of the types to be at least minimally effective in combat (yes, even wizards).

A couple of points that deserve note:

The bonus adds for Warriors was one of my favorite additions to 7th edition types (yes, I know it was a house rule for many long before 7th edition). This bonus made Warriors masters of weapons as well as armor, which is as it should be.

Wizards, although considered noncombatants, can use larger weapons like broadswords, great axes, halberds and longbows; they simply get no personal adds and cannot cast spells as long as they are actively using the weapon. If you're a Wizard with a high dexterity, packing a good bow is a solid option. If you can hit your target, you can still do a lot of damage even without personal adds. Of course, give a Wizard a couple of daggers and he'll leave you wondering what noncombatant means.

Citizens are considered untrained, but they can still pick up any weapon and use it in combat; they simply receive half the number of personal adds. At first glance this seems odd. There are a lot of very different weapons available in T&T, but any average Citizen can pick up any of them and put up a decent fight. Could I pick up a broadsword and use it without hurting myself in the process? Well, maybe. What about a flail? Unlikely. But how many of those weapons will a character actually come across and try to use in his/her career (i.e. before a gruesome death)? Five or six? One could assume that the character has at least encountered those five or six weapons before. This rule does lead me to wonder, why can't Wizards do this if they are also considered untrained? I suppose that Wizards are less trained than Citizens except for those smaller weapons.