Humans in FRPGs: Awe and Wonder 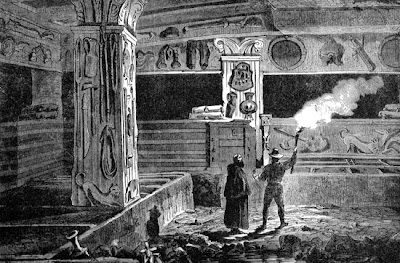 My post on a potential Human Kindred Modifier at the beginning of February sparked some good discussion here and seemed to spark even more at Trollhalla (or at least I assume it was my mention of the topic; I could be wrong). So it seems to be a worthy topic to continue here.

The fundamental question raised by most is: why play a human in Tunnels and Trolls, or any fantasy role playing game for that matter, given the inherent mechanical advantages of nonhumans? I typically play human characters in T&T and other games so I feel that I can provide an answer to this question. The primary reason has nothing to do with game mechanics and everything to do with role playing.

Playing a human provides a sense of awe and wonder.

Nonhuman characters, dwarves, elves, hobbs, leprechauns, fairies, are fantastic in nature; they are a part of the fantasy world that you are exploring. If everything and everyone is fantastic in nature, then where is the marvel over the fantasy? Where is the awe and wonder as you explore the world? Dwarves were raised in huge underground cities. Elves live hundreds of years and are effectively immortal. Leprechauns and fairies are inherently magical. Fairies can even fly. You may even decide that some of the nonhuman kindred like dwarves and elves can see in the dark (I am glad Ken did not).

Will these nonhuman characters care if they are exploring an ancient ruined temple or castle? Will exploring a cave be anything other than like returning home? Will that dark forest fill your characters with a sense foreboding or a sense of nostalgia instead?

Raised in a small town or even a city, human characters will find such locations to be mysterious and wondrous. An alien world lies out there waiting to be explored; lost cities, lost civilizations, and lost treasures guarded by unknown beasts and strange creatures. All of these things have a powerful force of attraction to adventurous humans, but they still instill fear and even terror. What is a man or woman in comparison to these supernatural forces after all?

My basic point here is that the fragility of the average human character is an appealing trait to me. Those human warriors, wizards and rogues are heading out into a world where most things are tougher than they are with just some skill, knowledge, and equipment to set themselves apart. When they do go to explore those ruins, caves, or dark forests those locations will be as alien to them as another planet, full of mystery and unknown terrors.

Of course I don't expect everyone to agree with my opinion. Feel free to give your own thoughts on the matter.
Posted by Dan at 11:00 PM