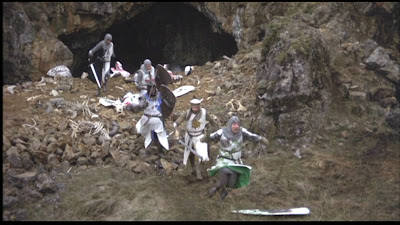 Yeah, right; that's true of the dead ones at least. The truth is even the greatest warrior, rogue, or wizard may someday meet an opponent that is just too tough to beat. Unfortunately, this realization often comes only after combat has begun. In this instance, it's best to know when to pack it up and run.

In GM run games, retreat is always (or almost always) an option. A GM can easily assess the situation and decide if retreat is possible. With a good plan by the players and perhaps a saving roll or two it should be allowed. Solo adventures should also include the option to run from a fight if it is possible given the situation.

Unfortunately, providing the option to run from a fight and smoothly integrating it into the adventure is not always an easy task. The mechanics are simple enough, but coding such an option can produce a cascading series of consequences that requires several new paragraphs to account for that option. For this reason, the option of retreat is typically not offered in most solo adventures. I'm sure this has led to a number of dead delvers, although a creative player may go ahead and 'write in' an option to run rather than face eventual and certain death after a long series of dice rolls.

So how to do it? The first thing is to provide the option in any combat situation as long as there is a clear path of retreat. If the delver is in a locked room, has just fallen into a pit filled with zombies, or is standing on a narrow ledge with giant rats on either side, then retreat is not really an option. But if a fight is happening in a corridor, what's to stop the delver from turning and running the other way? But don't make running automatically successful. Require a Saving Roll on Dexterity or Speed. Maybe the character even has a Run Away! talent to apply. The level of the saving roll should reflect the difficulty of escaping the opponent (obviously). Is it fast or slow? Does it have extra long arms to reach out and grab the fleeing delver? Are there more than one opponent? Does the delver have to get around the monster to make it out a door? You should also consider the environment and its effect on the likelihood of losing that monster that is in pursuit. A Level 2 Saving Roll is usually good in most situations, but if the delver is fighting a zombie in an open corridor, turning and running should likely only require a Level 1 Saving Roll. Trying to run from something that can fly across an open field may require a Level 4 or 5 Saving Roll.

Failing the saving roll could simply mean that the delver has to keep fighting, but it can also have more interesting consequences. You could penalize the delver's next attack by some or all of his/her personal adds; no adds for Dexterity and Speed for example. A major failure indicated by rolling a 3 could have even more catastrophic results. Perhaps the delver tripped and fell while trying to run? Maybe the monster now gets a free attack? That delver better have some good armor.

If the delver makes the saving roll and manages to escape, then you have some new problems to deal with. Where and how far does the delver run? When given the choice to run, you should provide a direction as well; out the door behind you, back the way you came, down the passage to the right, etc. This makes it clear where the delver will be going. The simplest way to deal with this, although not the most satisfying in my opinion, is to send the player to the paragraph which describes the adjacent location. This may be right outside the room where the delver was just being pummeled by a gang of goblins. But why don't they just walk out the door and continue the beat down? In order to avoid this sort of issue, you may want to make the delver run as far as possible, perhaps to the last cleared room or an established 'safe zone' of some kind. A die roll could also be used to randomly determine where the delver manages to lose his pursuers and is able to stop running.

The next issue is what to do with that monster the delver just ran away from. If the encounter was random, then you can easily assume that the monster randomly wanders away from the scene and the delver may never see it again. No problems there. If it was a set encounter, however, you should leave it there waiting for the delver to return. If there is anything special about first encountering the monster (say it was hiding behind a curtain), you may need to add an "If you've been here before..." line. This line can then send the player to a new paragraph that redirects him/her to different paragraphs if he already defeated the monster or ran away. If the delver ran, then the monster is ready and waiting. See what I mean about cascading consequences. Another interesting but more complicated idea is to have the monster move to a new location or go out looking for the delver and become a wandering monster. Doing the latter is fairly simple; you can direct the player to use the monster as the very next wandering encounter or, if there is a wandering monster list provided, to replace one of the wandering monsters with the newly unleashed beast.

I'm often trying to come up with ways to make solo adventures as flexible as group adventures. Adding the option to run is one simple way to do just that.

Here is an example of including retreat as an option:

1. You open the door and enter a torch-lit room. If you've been here before, go to 7. There is another door in the wall on the opposite side of the room. It may be one step closer to freedom. Unfortunately, standing in front of the door are three large, ugly goblins each wielding an axe and a shield. The one in the middle steps forward and points at your with his axe. "That's him," he says."Get him boys!" All three goblins charge toward you. If you stand and fight them, go to 2. If you turn and run out the door you just entered, go to 3.

2. The goblins quickly surround you and attack. Each goblin has a MR of 30 (4D+15) and can take 5 hits. You can try to run out the door behind you at the end of any combat turn by making a L2SR on DEX. If you make it, go to 4. If you fail, then you must continue to fight, but you lose any adds you receive from DEX for the next combat turn. If you manage to kill all three goblins, go to 12. If your CON is reduced to 0 or less, then the goblins pick your lifeless body clean of valuables laughing all the while.

4. You manage to break free and bolt out the door. You rush down the passage and you hear the heavy stomp boots behind you. The goblins are in pursuit. Make a L1SR on SPD. If you make it, go to 6. If you fail, go to 5.

5. The goblins manage to catch up to you and you find yourself cornered. There is no escape now; you must fight to the death. Each goblin has a MR of 30 (4D+15) and can take 5 hits. If you manage to kill all three goblins, go to 11. If your CON is reduced to 0 or less, then the goblins pick your lifeless body clean of valuables laughing all the while.

6. You are much too quick for the goblins and manage to outrun them. The sound of stomping boots behind is replaced by cursing and eventually even that eventually fades away into the distance. You eventually make it back to the four way intersection. You decide that heading back to the north would be a bad idea. If you go south, go to 20. If you go west, go to 30. If you go east, go to 40. Whichever way you go, you should choose quickly; those goblins could always catch back up with you. The next time you encounter a wandering monster, if you roll an odd number on the Wandering Monster Table you stumble upon the three goblins and should go to 80.

8. The bodies of the three goblins you killed still lie on the floor. They are exactly where you left them, but they look stripped clean and a bit gnawed upon. There are two doors leading out of the room. If you go north, go to 60. If you go south, go to 70. If you search for hidden doors, go to 13.

9. There is no sign of the goblins that were here before. The room is a simple square chamber, no more than 20' square, with bare walls. There are two doors leading out of the room. If you go north, go to 60. If you go south, go to 70. If you search for hidden doors, go to 13.
Posted by Dan at 6:30 PM