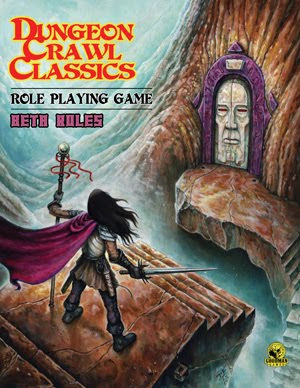 Ok, so this has nothing to do with Tunnels and Trolls and little to do with solo gaming but I would like to join in the discussion of the recent Beta release of the Dungeon Crawl Classic RPG rules. I have to say that I was not really paying much attention to this system. I have a small set of games that I enjoy and my fantasy gaming interested are met by a few of them so a new set of rules did not interest me. But I read the post on Grognardia and the comment about the art piqued my interest so I downloaded a copy for myself to have a look.

The art is amazing. I am quite surprised that so much of the art was included in the free download. I suppose it speaks to how confident Goodman Games is in selling the final product. The art is definitely old school and you'll see a number of recreations of art from previous rule sets (Moldvay D&D in particular), but Earl Otus was one of the contributing artists so how can you go wrong. I would recommend downloading a copy simply to look at the art even if you have not interest in the rules. It's that good. I got five or six solid ideas for new solo adventures just by leafing through pdf once.

As far as the rules go, I cannot really see myself playing this one. The Beta version of the rules come in at 157 pages and it's only supposed to be an excerpt of what's to come. Oh my. I'm not sure I want to deal with more rules. There are also a large number of different tables which are required for use during game play.

But there are a few things which interested me at first glance:

1. The rules for character generation explicitly state that abilities are rolled by 3d6 in order. All other variation are not allowed. This can easily be ignored by those that prefer, but I like it.

2. Luck is included as an ability. Luck provides a modifier on actions, but the player rolls on a table with 30 possibilities to see what types of action his/her luck helps or hinders. The possible options range from attack rolls, agility checks, poison resistance, spell checks, and finding secret doors. Luck also has certain affect depending upon a character's class. A warrior, for example, may use his/her luck modifier to influence attack rolls with one type of weapon. What I really like, however, is the option to burn luck. Players can opt to permanently lose luck in order to influence a die roll in order to survive life-or-death situations. So to get a +6 on a roll, you permanently lose 6 Luck. This is a nice rule and one I may consider adding to my T&T House Rule list. Burning Luck to add an equal bonus to a Saving Roll would help in those extreme situations where death is only a roll away. It would also increase solo survival rates; for a while anyway. A permanent reduction in Luck would eventually come back to haunt you.

3. You start the game a Level 0 nobody. In fact you start in the hole with -100 xp. You have to work your way up to 1 xp at which point your character can choose a class. So what are starting characters? You roll on an occupation table to find out. There are 50+ possibilities including gambler, indentured servant, cooper, mercenary, grave digger, noble, woodcutter, shaman, dwarven miner, halfling gypsy, and elven forester. Each occupation provides a starting weapon and a piece of equipment. The mercenary, for example, gets a longsword and a suit of hide armor. The cooper gets a crowbar and a barrel. In addition you get a handful of copper coins; enough for some torches, sacks, and a bit of food but not much else. The rules state that these 0-level characters will have a high level of attrition. No kidding. They also state that a properly sized party of 0-level character is 15 individuals. Wow. I suppose each player has few characters. As member start to die, however, those that are left are better equipped. Suddenly the cooper has a longsword and some armor to go with his crowbar and barrel. I am really intrigued by this idea. There is always the question of where your character came from and this method serves to help answer that question. You in fact guide your character through those first steps of becoming an adventurer. But then there is the question of how your Level 0 Cooper suddenly becomes a Level 1 Warrior skilled in all manner of weapons and acts of martial prowess or a Level 1 Wizard capable of wielding magic and other arcane knowledge. I suppose we could assume the cooper goes off to train for some period of time, but that seems a bit forced. But the idea of a party of poorly equipped 0-level characters going down into a dungeon really sounds like fun. There is a pretty funny illustration in the book depicting just such a group. This idea makes me want to write a solo for Citizen types.


Those are my initial impressions. As I said, I'd likely never play this game but I can see it's appeal. If you have not done so, download a copy and have a look. If nothing else do it for the art.
Posted by Dan at 11:30 PM