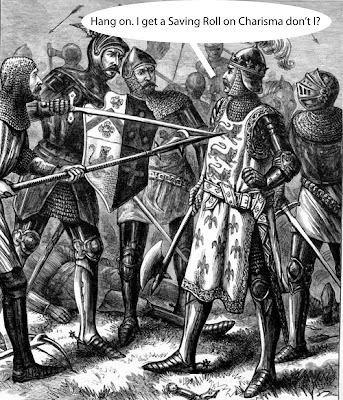 In a previous post I commented on the 'burning luck' option from the Dungeon Crawl Classics RPG. In burning Luck, a player may choose to permanently sacrifice points from his/her character's Luck attribute in order to raise a die roll by an equal number in a life-or-death situation. I thought that this was a perfect house rule for Tunnels and Trolls, especially when playing solo adventures where life or death often hangs on a single roll of the dice. Well it turns out that someone else thought that this was a good idea. Gaptooth over at the Trollbridge reminded me that just such a T&T house rule was described by JongJungBu (aka Patrick Witmer) over at his website. Patrick has an excellent T&T website and is well worth a look. Patrick has also written and published three excellent T&T solo adventures that you can download for free from his website (or from the links to the right). Patrick's website includes Seven Solo Spicing House Rules and Seven Solo Safety House Rules in which 'luck burning' is included as number 7. Here it is:

Luck: If at any time a fatal roll would kill a character, he/she may permanently spend his/her LK to make up the difference. This LK cannot be recovered like ST or CON but is lost permanently. To spend LK for a killing blow in combat, the player must bring his CON back up to 1 (exactly) and subtract that many points off of his/her LK permanently. Example: A killing blow in combat would reduce CON to -7, instead the player opts to use LK and therefore must spend 8 LK to bring CON to 1. To spend LK for a fatal SR, one must lose LK equal to the difference in the target roll. Example: A failed L1 SR on LK would have resulted in death due to being 3 under the target number, instead the player opts to spend 3 LK to make up the difference. Note that spending LK for a LK SR does not reduce the previous roll for such a case and LK spent on SRs only applies to those that would otherwise result in player death.

I like this house rule a lot for solo adventures, especially with the additional use to soak up damage that may otherwise kill a character. Of course if that character were still fighting, the loss of personal adds from the reduced Luck attribute would likely mean that the player is just delaying the inevitable. But if the damage were delivered by a trap or other one-time mishap rather than a MR300 troll repeatedly hitting you in the head with a club, this would be an excellent use of luck. Sacrificing Luck to make a Saving Roll may prevent injury altogether, or death in extreme circumstances. But again, one would have to use this option wisely because sooner or later you'll need to make a Luck saving roll.

There are two restrictions to Burning Luck that I would add, however. First, burning luck cannot be used to prevent a fumble or a natural roll of a '3' on 2D6 (or a 3 and a non-double 4 in 5th edition). A 3 always fails, period. Second, Luck may not be burned to less than 3. After all, an adventurer needs some luck just to survive from day to day. With a Luck less than 3 a character is certain to be struck by lightning, fall in a pit, hit by a meteorite, or all three at the same time.

Now I just need to put this rule to the test. If anyone else uses this house rule in solo or group play, let me know how it works for you.
Posted by Dan at 10:00 AM