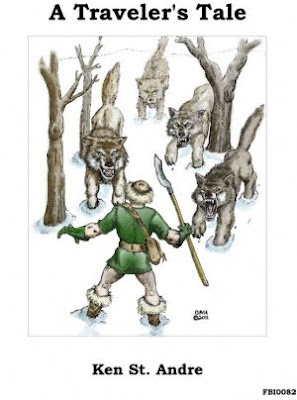 A Traveller's Tale is a T&T solo by Ken St. Andre which is a revised version of the solo The Mad Dwarf first published in 1982. In A Traveller's Tale, your character is heading toward the city of Khazan with a pack full of treasure won from a recent adventure. You running through the wilderness in the depth of winter and suddenly find yourself being stalked by a pack of dire wolves. With the weight you're carrying you have little hope of outrunning them. Up ahead you spot a building with smoke rising from the chimney. Could this building be a refuge or is it just another death trap waiting to lure you in? My bet was on the latter, but it beats being eaten alive by wolves.

I made five different attempts at A Traveller's Tale using five different warriors of various strengths and weaknesses. I did not use a rogue or a wizard, since their spells would have been of minimal or no use as stated in the instructions. My adventures lasted an average of 15 minutes, ranging from 5 to 20 minutes. Out of these attempts, three warriors were killed but two managed escaped with their lives and a large amount of gold. The instructions for the solo call for a character with less than 100 adds. This is a bit vague, but I would recommend between 50-60 adds. Of course, there are several situations where adds alone won't help you. To get the most out the the adventure, a well-rounded character with fewer adds will fare better. If you're strong and lucky but dumb, you probably won't survive.

The concept for A Traveler's Tale is simple but well-executed and fun. The solo throws you right into the adventure, running for your life with no need for any complex back story or accepting of any quests. You're in the wilderness being chased down by wolves and see a house. You either enter or you don't. It's a concept I also used in House in the Hills; except the house there was much less welcoming. Whether you enter the house or stay out to face the wolves, the adventure stays simple. But despite the simplicity of design there are a lot of choices to be made, especially if you enter the house. It can be tough to fit a lot of options into a few rooms and Ken does so here quite well.

As usual for Ken, the writing in A Traveler's Tale is excellent. The writing really sets the mood for the adventure. It's tough to figure out what is going to happen and Ken's writing does a good job in not giving anything away. Ken's voice is obviously present and there is a good amount of humor. Did I expect to encounter anthracite used as a description for taste? No, but I loved it. That and the description of the dwarven dancing girls.

The presentation of A Traveler's Tale is pretty good. I only have the pdf version, so I can only really comment about the self-printed copy that I used. You can print the solo as a nice little booklet by folding double-sided pages. It's very legible even when reduced to this size. My only issue is that with the very large margins, you only get two or maybe three paragraphs per page. This make the booklet thicker than it really should be considering the length of the solo. A Traveler's Tale is well illustrated with original artwork by David Ullery, an up and coming artist in the T&T community. The cover illustration is one of my favorites. There are about nine major illustrations for the 40 page booklet, but these are dissected into smaller pieces (a closeup of a single face for example) so that almost every page has some art. Overall the quality of the art is very high, although it does get a little repetitive after a while. A Traveler's Tale also includes a nice random treasure generator at the end of the book which includes tables for different varieties of jewelry, statues, and gems that you could use for other adventures once you've finished the solo.

Editing of solos is always important; it's extremely easy to miss problems when you're trying to string together a large number of paragraphs. There are only a few typos in A Traveler's Tale which is nice. You'd likely miss them if you were not looking. I did encounter a couple of major problems while playing however; they were not fatal but they did require some searching. In two paragraphs you are forced to fight, however the details of your opponents (dice, adds, CON, armor) are not given or only partially provided. You can find these in other paragraphs within the solo, but you have to know where to look. For your information, the dwarf has a CON of 36.

Over all I would recommend picking up a copy of A Traveler's Tale. It was a lot of fun to play and does not take much time so it's great for a quick dose of T&T. The cost is low, only $2.99 for a pdf (my personal preference) from RPGnow or $8.95 for a printed copy from Flying Buffalo. Of course, it you want an autographed copy you should join the elite at Trollhalla and get one from Ken directly.

Now I present the adventure of one of the survivors of A Traveler's Tale, Aughmos Fyc, warrior and gambler extraordinaire. You might recognize this character as one of the pregenerated characters I provided for Temple of Issoth. He is a bit more seasoned at this point, having survived more than his share of horrors. If you don't want to spoil any of the surprised in A Traveler's Tale, you should probably stop reading now.


Aughmos heard the howling of the dire wolves again. They were definitely getting closer. Every now and then he caught a glimpse of their massive forms through the sheets of falling snow. Aughmos's pack dug into his shoulders. The weight of the gold inside was proving to be too much for his failing strength. He was going to have to make a decision soon. Suddenly he spotted a building ahead. Thin tendrils of smoke rose from the chimney, suggesting warmth and safety. Aughmos gathered up the last of his strength and ran for the door.

Aughmos made it to the door. An old sign showed a dwarf holding an axe and sticking out his tongue. Odd, Aughmos thought. Despite the strangeness of the sign, Aughmos knocked on the door. The door flew open and out stepped a grimy looking dwarf holding a large mug. His face was covered in hair, as with most dwarves, but he also had a jeweled patch covering his right eye. The dwarf snarled at Aughmos and said, "Come in or hit the road! It's cold out here and I hear wolves." Aughmos was not sure what to think of the obviously drunk dwarf, but he seemed less dangerous than a pack of dire wolves.

Aughmos entered the building. Inside was a large chamber with a low ceiling. There was a bar covered in bottles, vials and barrels. Hanging above the bar was a painting showing nude maidens dancing in the moonlight. Several darts were stuck in the picture. A large pot of foul-smelling stew simmered over a fireplace on the other side of the room.

"It will be 10 gold pieces to stay the night. Food and drink are extra!"

That seemed a bit steep, so Aughmos tried to haggle with the dwarf. Eventually Aughmos was able to convince the dwarf to include the food and drinks in the 10 gp price. Aughmos handed the dwarf the money and then went to stand in front of the fire to get warm. Standing by the fire, Aughmos started to get drowsy. The dwarf continued to drink and started to mellow out a little. Looking at the bar, Aughmos decided to join him. The drinks tasted awful, but Aughmos started to feel better and better after each one.

"Whatcha want to do now?" the dwarf asked. "We could play darts or I could bring out the dancing girls?"

"Dancing girls?" Aughmos asked. "That sounds like an excellent idea."

The dwarf stood and staggered through a curtain. You then hear him pounding on a gong. Suddenly you hear three dwarvish voice singing. Three female dwarves come through the curtains and begin to sing and dance before you. They wear very little and their dance holds Aughmos spellbound. After a long while, the dancers finish and run back through the curtain. Aughmos felt strangely different from watching the dance.

"Time for bed!" the dwarf said. He grabbed Aughmos's arm and led him to a cramped little room filled by a massive bronze bed.

"See ya in the morning crowbait," the dwarf shouted and left.

Aughmos stood alone in the room looking at the bed. It was certainly made for a dwarf. His legs would hang off the edge. Aughmos stepped up to the bed and gave it a closer look. As he looked at the footboard, Aughmos noticed that there was a razor sharp blade hidden inside of it. If he had stretched his legs across the footboard, they would have been sliced off. Aughmos felt the anger build inside of him. He drew his saber and left the room to find the dwarf.

The dwarf stood in the main room. He looked surprised but angry to see Aughmos. He quickly picked up an axe leaning against the wall and charged. Aughmos raised his sword and met the dwarf half way. In a quick exhange of blows, the dwarf was dead. His head lay on the floor near the fireplace. His body flopped against the bar.

"Serves you right," Aughmos said coldly as he sheathed his sword. Now that he was alone, Aughmos began to search the inn. Aughmos checked the bar first, but only found more of the dwarf's foul booze. After having one more drink Aughmos resumed his search. He eventually found the gong the dwarf used to summon the dancing girls. Aughmos considered ringing it, but decided against it. Better to just bed down in front of the fire for the night with his sword close at hand.

Aughmos woke in the morning refreshed. The wolves should have left by now, he thought. Looking over the carnage, Aughmos picked up the dwarf's axe and plucked the jeweled eye patch from his severed head. He then picked up his heavily laden pack and set back out into the wilderness headed for Khazan.
Posted by Dan at 5:00 PM