One Sword or Two? 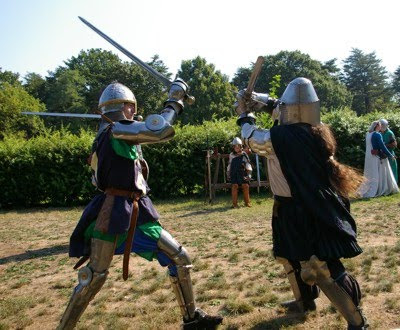 Starting characters are usually pretty poor fighters. Even a well-to-do starting delver will only be equipped with a weapon that provides three dice and a few adds. That's not much, especially when you are going it alone. One way to give your first or second level warrior or even rogue or wizard a leg up against that MR 30 goblin is to leave your shield behind and go into battle with a blade in each hand. With the right combination of Strength and Dexterity, any character can become a unstoppable killing machine; well, almost.

In a previous post I mentioned my preference for using two weapons over a weapon and shield. My personal favorite combination with starting warriors is a short saber and bank. In all T&T editions, as long a a character has a Strength and Dexterity equal to or exceeding the combined Strength and Dexterity requirements of two weapons, he can use those weapons at the same time and get the full combined dice and adds of both weapons. That's a pretty significant increase in fighting power. Even the weakest of characters could go into a fight with two banks requiring a ST and DX of 2 and get 4 dice and 6 adds. An average warrior with a ST and DX of 12 could use a short saber and haladie and get 5 dice and 5 adds. A more powerful warrior with a ST and DX of 19 could potentially wield a falchion and a short saber and get 7 dice and 5 adds on top of any personal adds, which if the character wasn't horribly unlucky would be at least another 14 adds. Not too bad. Such a warrior could handle a MR 50 monster single handed. The dual weapon wielding warrior not only has a better chance of winning a combat turn, but also effectively limits the number of hits he may take if he does lose. In this way the second weapon also doubles as a shield.

It does seem that this rather simple game mechanic can get a little unbalancing. In my play-by-post game, The Lost City, there are two dwarf characters, a warrior and a wizard. The warrior wields two short swords providing him 6 dice and 11 adds in combat. The wizard wields two kukri (daggers) providing him 4 dice and 20 adds (!!) in combat. Just these two characters, therefore, are able to muster 10 dice and 31 adds per combat turn. That's an average CBT of 61 between the two of them and they're first level characters; holy $%#^!

Given the power that using two weapons provides, I have previously stated that shields are almost useless in the rules as written. I tried to remedy this situation in another post with some shield house rules to make them a little more appealing. There is also the question of two-handed weapons. There are few cases where a single two-handed weapon provides the dice and adds of two one-handed weapons; so why bother with a polearm or two-handed broadsword unless your character concept demands the use of such weapons.

Despite the balance issue, there are more practical questions about fighting with two weapons to consider. For example, when fighting with two weapons, could you really get the most out of both? Is it reasonable that anyone could effectively fight with two broadswords, two scimitars, or two heavy flails? Does fighting with two weapons require special training and years of practice that most characters would not have (yes it does)? This is supposed to be heroic fantasy, however, and not an accurate re-creation of medieval combat. Almost every sword and sorcery story includes a warrior charging into combat with a weapon in both hands. So rather than removing the use of two weapons completely, why not alter the rules a little (i.e. complicate them) to keep the arms race under control.

To that end, I have come up with a few house rules for two-weapon fighting.

Warriors only: Fighting with two weapons requires special training and practice. Warriors have this training, rogues and wizards do not.

One weapon must have at least 1 die less than the other: The weapon in the warriors off-hand should be smaller to maintain balance and speed. The classic example of this is fighting with a sword and dagger.