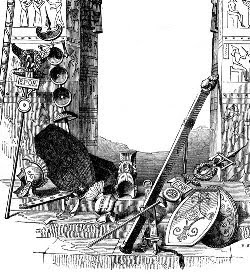 The solo adventurer faces difficult challenges. Among these is the need to carry enough equipment to be able to deal with any situation that arises, but not so much that he/she is unable to walk more that a few feet without stopping to rest. Since a previous post considered the use of equipment in solo adventures from a designers perspective, I thought I would provide a list of my personal thoughts on equipping a lone delver from a player's point of view.

Armor: Obviously a critical piece of equipment. But how much do you really need? A warrior in a full suit of cuirboille (7.5 ed.) or leather (5th ed.) armor can take 14 hits before losing any CON. Is there any need to encumber yourself with a full suit of mail so that you can absorb 22-24 hits? Let's face it, if you lose a combat turn by that much, you're not going to win and you're better off running away. If you're not a warrior then don't worry, you're likely dead anyway (kidding). To go with your nice set of armor you should also have a good set of boots.

Melee Weapons: I always use two weapons and leave the shield at home. Shields are great if you have a few friends to help out, but alone they're a nuisance. The hits taken to weight ratio is ridiculous. Sure, if you're a warrior with a target shield you can take 8 more hits, but wouldn't you rather generate a couple more dice and some adds for you combat total? In a way this extra weapon serves a defensive purpose as much as an offensive one. The higher your combat total, the fewer hits you'll end up taking if you happen to lose. But isn't it better if you don't lose? The bank makes the perfect off-hand weapon; it only requires a ST and DEX of 1 so it is easily paired with a variety of other weapons and get 2D+3. You can then generate between 5 and 15 extra hits each combat turn.

Missile Weapons: If you're planning a cross-country adventure and have the dexterity, a self bow is a good choice. If you're planning on crawling through some caverns or exploring a lost temple, you probably won't get the chance to use one. Better to tuck a couple of dirks in your boot just in case you get a chance to throw something and save your money.

Lanterns and torches: This one is a no-brainer. Every lone delver should be carrying a light source. I show no mercy to adventurers that stumble around dark places in my solos before lighting a torch. Who knows what is lurking in the shadows? Torches are cheap. Carry one, or better yet two.

Rope and grappling hook, hammer and pitons: Eventually you are going to have to climb up or down something. It could be a ruined wall of a forgotten keep, a pit you just fell into, or a cliff below a wizard's tower. Rope is also good for other purposes like tying up prisoners, making tripwires, lassoing hoofed mammals, or dragging heavy loads. I usually just take one of these pairs of items to keep weight down. Considering the versatility of rope it's a solid choice and ff you have the money, you can't beat silk.

Packs and sacks: How else are you going to carry all of this stuff and all of the coins, jewels, and other knick-knacks you manage to steal?

Provisions: Armies and delvers march on their stomach. Fighting and spell-casting are strenuous activities. So is lugging around 30-50 pounds of armor, weapons, and gear. Eventually you're going to have to stop and drink some water or eat some food. It's better to be safe and pack some just in case the adventure calls for you to eat or lose CON. One days worth of provisions and a waterskin will usually suffice unless you're about to undertake an epic journey.

First- and Second-Aid Kits: Both of these are nice additions from the 7.5 ed rules. The second-aid kit has enough bandages, healing salves, and pain killers (or so I assume) to restore 5 CON points five times. This can make all the difference in a solo adventure. First-aid kits are not described, but given the fact that they're one-tenth the cost of a second-aid kit I have used them to restore 1 CON point five times. In either case, these kits are a life-saver in solos, especially if you're using spite damage. Not every tomb and dungeon has a convenient fountain that magically heals those who come to pillage and plunder.

Other gear: There's always other equipment you may need at some point. The 5th edition delver's pack is a good assortment of random bits (string, chalk, wax, mirror, matches) that could eventually come in handy. A couple of cloves of garlic, some wooden stakes, and maybe a silver arrow or two may be useful if you're out hunting vampires or werewolves. Of course the 7.5 edition rules come with a vast array of new equipment to choose from. If you're the MacGuyver sort you may want to pack some tools like saws, mallets, awls, crowbars and the like. In a solo adventure, however, it's unlikely that you'll find a use for them. I always stick to the basics. Although a crowbar can come in handy and it makes a good back-up weapon if you run into trouble.

These are the principles I use to equip my solo characters. I'm sure everyone has their own ideas and I'd like to hear them.
Posted by Dan at 7:00 PM