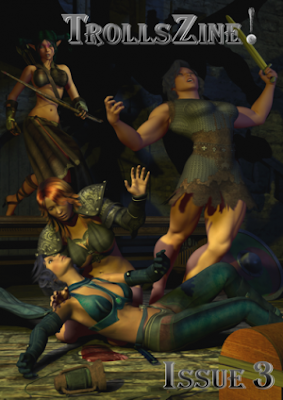 The third issue of TrollsZine has arrived at the Trollbridge Lulu Storefront and RPGNow for the unbeatable price of $0. This issue is bigger than ever with 82 pages of adventures, rules elaborations, short fiction, adventure locations, new monsters, spells, and magic items. There's even a review of The Tomb of Baron Gharoth. The editors, Dan Prentice and Kevin Bracey, have done a phenomenal job in making the project a continuing and improving reality.

There just so happens to be a solo adventure by yours truly, The Temple of Issoth, as well as one by Ken St. Andre, Four Jars of Mead. I must admit that I never thought one of my solos would end up in a publication with the man himself. The Temple of Issoth is a short solo. I managed to keep it to a trim 76 paragraphs. Writing short solos is a challenge; I tried to strike a balance with the fewest number of paragraphs with the maximum amount of choices and action. I'm definitely interested in getting some feedback from those of you who give it a try.

I've only had a chance to browse through this issue so far. I'll need to make some time to sit down and read it in detail. I'll definitely give Four Jars of Mead a try. There are also two GM adventures that Bludgeons and Flagons (designed for trolls) by Justin Williams and The Tomb of Agathor by Tori Bergquist that look quite good. I also spotted a few new magic items, spells, and monsters to entertain the delvers currently exploring The Lost City. How can you go wrong with a carnivorous, fire-breathing, death camel? Thanks Justin.

You can download TrollsZine 3 for free from Lulu or RPGNow.