Giving Shields Their Due 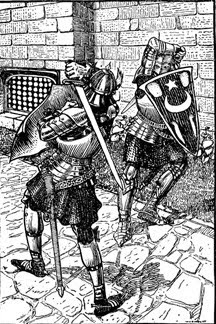 My post on 'Equipping the Lone Delver' generated a good deal of discussion in Trollhalla, in particular over the relative value of carrying a second weapon versus a shield. In the discussion on Trollhalla there were some interesting ideas thrown around regarding house rules for dual-weapon wielding and shields. In this post I'm sticking to shields; I'll comment on house rules for wielding two weapons in a future post.

In the Tunnels and Trolls rules as written, any character can use two weapons as long as they have ST and DEX scores equal to or greater than the combined requirements of the two weapons. The advantage of using two weapons is that you get the full dice and adds of both weapons. The obvious disadvantage of using two weapons is that you cannot use a shield. In my post on equipment for solo adventurers, I indicated my preference for using two weapons over a shield. My reasoning was that the extra hits generated by a second weapon effectively protect a character as well if not better than a shield; they also increase the likelihood of winning a combat turn. I did not mean to malign shields in any way. They are certainly useful pieces of equipment; especially in real combat. But given the T&T combat mechanics they are simply less useful.

In reality, however, shields are used for more than passively deflecting damage in combat. In trained hands, shields can be used to hit and stun opponents, intercept incoming projectiles, deflect blows aimed at nearby comrades, or even overlapped to form impenetrable walls or formations (the classic Roman testudo). Of course, all of these additional uses do require special training.

As I said there were a number of suggestions for house rules for shields, both those that have been employed and those that were just thought up. Here are just a few of those ideas. Sligo suggested that a player could make a Saving Roll on Speed each combat turn at the level of the attacker; a successful roll would mean the shield took double the number of hits. Khalfrrd mentioned that shields are really parry weapons and as such they should reduce the number of dice the opposing side rolls. The number of dice would be doubled when attacked by missile weapons. In addition, if two or more shields were interlocked, the opposing side would lose an additional die for each pair of shields. Mahrundl had an interesting idea that shields could be used to absorb one or two more points of spite damage. This idea was elaborated on by Khayd'haik who suggested that a shield can absorb a number of points of spite damage per combat turn equal to the hits taken; however, if a shield is used to absorb spite damage it cannot be used to absorb normal damage that combat turn. Also, each point of spite damage absorbed reduces the armor value of the shield by one. The idea that any shield could also be used as a weapon was commented on by Toad-Killer-Dog who mentioned that all shields served as 1-die weapons in his house rules. Knorrrsk, on the other hand, suggested that each shield provided combat adds equal to it's armor value.

Ken St. Andre also chimed in on the subject stating that in T&T shields always provide protection, even when slung across your back; the rationale being that a large piece of metal or wood strapped to ones body will offer some protection from incoming blows just like body armor. I had not considered this possibility before, so I went back and read through the various editions of the T&T rules. In the 1st and 4th editions, it does indeed say that slung shields provide half their hit value in protection. But there is no mention of this rule in either the 5th or 7th edition rules. Of course, the possibility of using two weapons is never explicitly stated in the 5th edition rules either (although it is hinted at in some of the notes in the weapons tables). If the slung shield rule were incorporated, a character could wield two weapons and sling a shield and get the best of both options; provided he has the strength to carry it all.

Incorporating ideas from the members of Trollhalla, including Ken St. Andre, with some of my own, I have come up with this list of house rules for making shields more appealing in T&T. In all examples I am using the 7.5 edition rules for armor values.

Absorbing Spite Damage: Any shield can be used to absorb 1 point of spite damage per combat turn; however the number of hits taken by the shield is permanently reduced by 1 as a result.

Protection from Missiles: Warriors and paragons (warrior-wizards) equipped with a shield may make a SR on DEX to deflect incoming missiles. To determine the SR level, subtract the number of hits taken by the shield from the number of dice of the projectile [Ex. A warrior with a buckler (3 hits) is fired upon by an uruk with a crossbow (5 dice). If the warrior can make a L2-SR on DEX, he will deflect the crossbow bolt.]

Protecting Comrades: Warriors and paragons (warrior-wizards) equipped with a shield can elect to allow an ally fighting on their shield side to make full use the doubled hits taken value of the shield. The warrior wielding the shield may not use the shield to absorb normal or spite damage that combat turn.

These house rules make shields much more appealing in my mind, especially for warriors, as it should be; they are the ones trained in the use of such equipment. They are also not overly complicated so they shouldn't slow down game play by requiring multiple additional die rolls or charts to reference. My thanks to the member of Trollhalla for all their excellent comments and input.
Posted by Dan at 12:00 PM