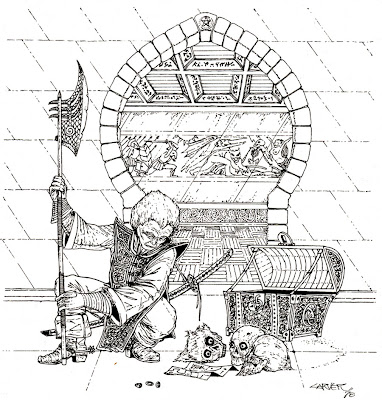 I've added this new piece of art featuring a lone delver from the Tunnels and Trolls 5th edition rulebook to the sidebar. I plan on changing this picture about once a month. This piece is by Rob Carver and is one of my favorite from the 5th edition rules, but all of the illustrations from that book form the basis of my personal image of the T&T world. What I love about this illustration is how much is going on despite the fact that it is a seemingly simple picture of someone stopping to read a map.

We have a lone warrior (or perhaps a rogue or even a warrior-wizard) squatting over a map next to an open chest. Also on the floor around him are three rings and three skulls. The delver appears to be in a temple or tomb, given the elaborate mural on the wall in the corridor beyond the archway. The mural depicts warriors attacking demons, undead, and other monsters. The monsters seem to be falling before the warriors, so this may be the tomb of a great hero and the mural depicts one of his (or her) victories. Turning our attention back to the delver, we see that he has some skill at picking locks; a padlock hangs open on the latch of the chest (or maybe he found the key?). The delvers prize consists of the three rings lying in front of him and the map he is studying. But then there are the three skulls. Were these also in the chest or are they the decapitated heads of the guardians of this treasure? Looking at the closely, the eyes of the skulls almost seem to be staring at the map as well. What is most striking, and steals the show in my opinion, is the trail leading from the chest to the bearded skull on the right. These are not the harmless heads of defeated foes, they are alive and mobile. But are they helping the delver or attempting to harm him? Are they the remains of three wise sages with knowledge to share or terrible beasts that slay the unsuspecting delver (but how)? I think this might be worth some more thought. I'm planning on 'fleshing out' these skulls and submitting them to Troll Hammer's Creature Feature. We'll see if they are friend or foe.
Posted by Dan at 1:40 PM