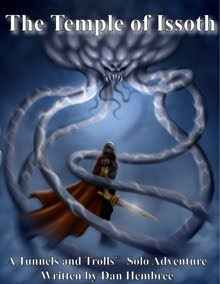 I recently released a stand-alone version of my solo adventure The Temple of Issoth on RPGNow. This solo first appeared in TrollsZine #3 released in August. I have made a few modifications and improvements to the original solo, including corrected a couple of links, adding a few new paragraphs, and providing some new options. I have also added a color cover with art by Joe Calkins (Cerberus Illustration) and Robert Hemminger (Avalon Game Company). The interior of the book includes several black and white illustrations. The Temple of Issoth also includes three fully equipped pregenerated characters just in case you don't have a delver that meets the requirements of the adventure.

The Temple of Issoth is currently available as a free pdf download at my Lone Delver Games page. I will be releasing a print version of this solo on either LuLu or the new print on demand feature offered by RPGNow. So far The Temple of Issoth has been downloaded over 260 times!

"You must help me. The priests of Issoth have carried my son away. He is to be sacrificed to their dark god this very night. I will pay you 100 gold talents if you go to the Temple of Issoth and rescue him."

Your blood chills at the mention of Issoth's temple. You have heard only rumors of that dark and forbidding place. Horrible stories of demons and the undead. The priests of Issoth are said to be fanatics that sate the great beast Issoth's every fiendish appetite. This man asks you to risk a great deal and offers very little in return. Do you dare enter THE TEMPLE OF ISSOTH?

This solitaire adventure is suitable for a single humanoid warrior with 20-30 combat adds. You may bring whatever weapons, armor, or equipment you wish. Three pregenerated characters are provided if you do not have one that fits the requirements.
Posted by Dan at 1:46 PM