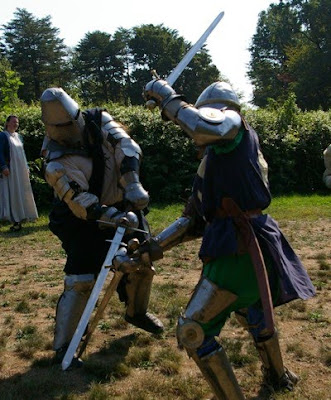 I had three good comments to my post on dual wielding weapons so I thought it would be worthwhile to revisit the subject.

First off I would just like to say that I know that two weapons can be wielded at the same time. I have seen it done to great effect. I myself was in the Society for Creative Anachronisms (SCA) and have seen several fighters wield two swords with great skill. But these were veteran fighters who had been practicing for years. Most used a sword and dagger but some used two swords; however, they never used two swords with blades longer than three feet and I certainly never saw anyone using two axes, spears, or maces. Of course they were using weapons made of rattan and not steel; but these fighting styles are also used by other historical recreation groups that do use steel weapons like the one pictured above and in my last post on this subject. So there is no question that it can be done in my mind, the question is simply how do you reflect this fighting style in game terms?

When fighting with two weapons at once, the weapon in the off hand is often used for defensive purposes (at least as far as I have seen). This off-hand weapon is used to block incoming blows, launch feints, and occasionally make attacks. This is my reason for reducing the effectiveness of the second weapon by not counting weapon adds. Another suggestion on Trollhalla was that the second weapon only provides extra adds in the amount of the dice plus one if the weapon has positive adds. A dirk (2+1), for example, would provide +3 adds if used as a second weapon. I like this idea, but I also like the random effect dice provide rather than pure adds. Of course, this penalty can be minimized by selecting weapons with the most dice and fewest adds. A short sword (3+0), for example, could be used as a second weapon with no penalty.

My comment on game balance had more to do with different fighting styles available to player characters rather than between characters and monsters. As Ken said, the fighting abilities of monsters are often balanced by game masters to match the characters. I usually don't subscribe to this idea, often presenting my characters with both push-over fights and hopeless ones; it's up to the players to figure when they should fight or not. But given the current rules I don't see why any character would not elect to use two weapons at all times. Mine certainly do. In T&T, characters can fight with one one-handed weapon often paired with a shield, one two-handed weapon, or two one-handed weapons.

Let's look at a match up between three warriors with a 14 Strength, 14 Dexterity, and 14 Constitution. Looking for maximum punch a warrior selects a headsman's axe with 4D+4 and pairs it with a pavise shield that can take 7x2 hits. Another warrior, wanting to get the largest weapon possible, selects a forkspear, a 7' polearm that gets 5D+2. Maybe it's not the most practical weapon to bring into a dungeon, but what the hell. A third warrior likes the flash of wielding two blades. He selects a saber and a haladie that gets 5D+8 combined. The warrior with two weapons is the most effective in combat according to the rules as written. Of course, the warrior with the shield can absorb 14 hits of damage, but the warrior with two weapons generates 1D+4 more per combat turn which is often enough to turn the tide of a battle.

These lopsided results point to the reason I think it is necessary to modify the dual-wield rules. I simply don't want the warrior with two weapons to always win a fight just because he has two weapons. This is why I wanted to add some kind of penalty to the second weapon and limit the size of the weapons used. Tom's suggestion of doubling the Dexterity requirement of the second weapon was quite interesting. This rule would definitely temper weapon combination. In the end, however, I think I prefer limiting the number of dice of the weapons that can be used and cutting the adds of the second weapon for the sake of simplicity.

I played out some quick fights with the house rules from my last post and did find them a bit wanting. So like any good set of house rules, I altered them. Here are my newly revised house rules for dual wielding weapons. I think that they are a little cleaner than my last set. Of course they are only my house rules and everyone has plenty of their own.

No weapons with more than 3 dice may be wielded at the same time. This eliminates the ridiculous combination of heavy weapons like a broad axe and a pilum or a war hammer and morningstar. I know this is fantasy I cannot see this happening. Of course this rule applies to human-sized characters. This can be increased by one or two dice for such larger than human character types as trolls, ogres, or giants.

Warriors may use any two one-hand weapons with 3 or fewer dice. Rogues may use a second weapon with 2 or fewer dice. Wizards may not use two weapons at once. This reflects the extra training of warriors but allows rogues to use a dagger or similar as an second weapon. Wizards, with no combat training, are more likely to hurt themselves while trying to wield two weapons than their opponent.

Weapon dice are used for the second weapon but not weapon adds. This accounts for a slight loss in effectiveness of the second weapon in attacks. This is meant to help balance the three fighting styles even if it is not an ideal representation of reality.
Posted by Dan at 2:30 PM