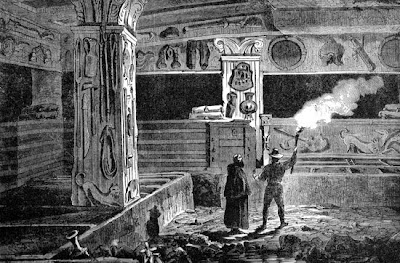 Well, it's a new year already. I started this blog and Lone Delver Games in January 2010. I thought I'd take a moment to light a torch, look around inside my head, and write down my plans for this blog and LDG for the coming year, at the very least for my own sake.

My first goal is to have a few more posts this year than last. I had some pretty dry spells some months, but sometimes life just takes over. I now have four regular series that I plan on continuing:

1) Evolution of T&T: Yes, I will be continuing this series. There is a lot to write about here. Next up is Character Types.

2) Solo Design: I have a few new solo design ideas in the works including one on making sure that there are consequences for player actions, a second on plot twists, and a third on ways of allowing players to take initiative and make choices not offered.

3) House Rules: More of these are definitely on the way.

4) Adventures of Phineas the Red: He's been pretty inactive since his adventures in Sword for Hire, but I hope to be able to run some more solos with him this year. The next adventure I have planned for him is Labyrinth.

There will also be the usual miscellaneous posts including some game reviews.

I will also be publishing more material for Lone Delver Games. My solos sold fairly well in 2010. If anyone is interested, here are the final numbers sold:

Not too bad. They weren't flying off the shelf by any means and I'm not getting rich, but I am very happy with the interest in my writing. Of course Temple of Issoth was free, but I was and still am excited to see it being downloaded so many times. Hopefully it's getting some new people to try T&T.

For 2011 I plan on releasing two large (250+ paragraph) solo adventures for Tunnels and Trolls. The first will be the spaghetti-fantasy bounty hunting adventure I've mentioned. This should be released by June. The second will be ruin crawl through an ancient temple complete with traps, treasure, and something large and nasty. This one should be released by November.

I am also considering producing a couple more free products. The first will be a book of pregenerated and fully equipped characters for use in each of my solos. I'm thinking of having three or four characters specifically designed for each solo. The second will be a book of my house rules for T&T combat. This will cover all the basic fighting techniques, some of which I've covered in my blog, such as weapon, weapon and shield, two weapon, and two-handed weapon. My goal is to provide some unique advantages to each style without making overly-complicated rules.

Those are my plans. Of course plans always change but I think I've set some realistic goals. I won't be able to post again for another week (I know, bad start), but when I return my next post will be a review of the wonderful new rules-lite game BEAN!
Posted by Dan at 4:00 PM