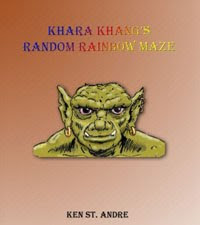 Ken St. Andre, the creator of Tunnels and Trolls, has recently published two new solo adventures, Khara Khang's Random Rainbow Maze and Deep Delving. Both of these solos are published under Ken's new Trollhalla Press and available as pdf downloads from the Flying Buffalo storefront at RPGNow/DriveThruRPG.

Khara Khang's Rainbow Maze has the distinction of being the first solo published under the Trollhalla Press brand. The Rainbow Maze is a 'funhouse' dungeon adventure, where you enter a series of rooms designed by the Maze Master to lure in foolish delvers with promises of fame and riches. Inside you'll face a fantastic array of monsters and hopefully make it out alive with some treasure. This solo has 33 paragraphs and is thoroughly illustrated by David Ullery 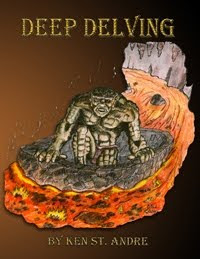 In Deep Delving you play a rock troll tunneling deep below the surface of Trollworld in search of one of Great Old Ones- trolls that have lived since the beginning of time. Your adventure takes you beneath an active volcano, down rivers of magma, and pits you against devious creatures of the underworld. You may also learn a thing or two about the ecology of rock trolls. It even includes three ready-to-run trolls just in case you don't have one handy. Deep Delving has 37 paragraphs and is once again well illustrated by David Ullery.

I have to say it's great seeing Ken publishing new material again. I look forward to seeing more from Trollhalla Press.
Posted by Dan at 10:58 AM