Magic: It's Not Just for Combat 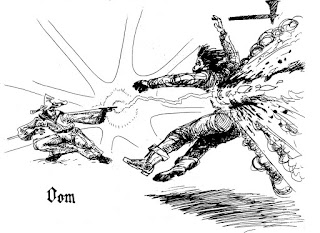 It seems to be a typical goal to find the use of spells in combat rather than their usefulness in delving in general which is not always about combat. I'll admit that I am often guilty of this myself. What is even more interesting is that in games that I have run most specifically non-combat oriented first level spells like Lock Tight, Knock-Knock, Will-o-Wisp, Oh There It Is, Teacher, and even Hocus Focus are forgotten in the heat of the moment, whereas Take That You Fiend and Vorpal Blade are cast without hesitation or need to check the rulebook. There seems to be a definite bias in most players minds toward combat-oriented magic.

Two common spells caught up in this issue are new ones from the 7.5 edition, Call Flame and Call Water. I'll single these spells out because they are the best examples of this focus on applying spells to combat. These two spells, which are listed as Conjuring spells and not Combat spells, have a lot of use off of the battlefield which is typically overlooked or forgotten. This is likely because they are each described as being capable of doing 1D6 damage to a living target (there is also the associated illustration in the rulebook). There was some discussion a while back at Trollhalla and at a few blogs including The Delving Dwarf as to why a Wizard would use one of these spells in combat rather than the standard Take That You Fiend spell. After all, both Call Flame and Call Water cost more Wizardry to cast and deal considerably less damage than a first level TTYF, so their combat potency is highly limited. Tom Grimshaw at the Alchemy Gaming Blog listed several interesting indirect ways to use Call Flame in combat rather than simply causing damage against a target. These include burning bow strings, wands, backpacks, lanterns, scrolls, and gunpowder. These ideas demonstrate the real value of these spells in combat rather than causing direct damage. Of course many of these ideas require being able to strike a target from a distance. This would necessitate house ruling the effective range of these spells which are listed as requiring Touch to be effective.

But this leads to the point of the discussion, the application of these spells to combat is entirely forced. Yes, there are much better spells like TTYF to use to inflict damage on your foes. Call Flame and Call Water are, in fact, general utility spells that should only be used in combat unless absolutely necessary. Their real value comes in all other aspects of delving whether you're crawling through a tunnel complex, an ancient ruin, a haunted swamp, a troll-infested forest, or a vast desert in search of a giant scorpion. Just think of all of the potential uses of having fast and immediate access to both fire and water, both created from nothing.

Here are just a few of the many uses of these spells off of the battlefield that I have thought of:

1. Create a quick fire when you have no other means. This can be useful in warding off freezing to death or hypothermia.
2. Create a fast light when you suddenly find yourself in the dark and no other means are handy. You can quickly light torches, lanterns, oil, paper, wood, or whatever.
3. Starting a fast, silent fire to serve as a distraction or to cover an escape.
4. Burning through dense foliage.
5. Cauterizing wounds. It's direct and clean flame for sealing big wounds (i.e. limb loss).
6. Disabling traps. A blast of flame applied to a trap should disable any triggering mechanism or at least burn off any toxins.

1. Create water (from nothing!) when you are in danger of dying of thirst.
2. Putting out a fire that threatens to consume something of value (such as yourself).
3. Clearing off hidden carvings, murals, doors, keyholes, etc. for better viewing.
4. Getting clean. This may seem silly, but getting your open wounds full of dirt, guts, and feces is a bad idea.
5. Disabling traps. As above, except a blast of water may be better if you're worried about igniting combustible material.

Of course there may be situations where these spells could be very handy in a fight. Call Flame might be ideal when fighting a paper golem or an animated ice sculpture. A GM might rule that Call Flame immediately destroys these creatures wheres TTYF only causes damage. The same goes for Call Water if facing a fire elemental or flame demon.

But my overall point is this, magic serves many purposes in delving. Wizards in T&T have incredible value. They are not subject to the restrictions of Vancian magic as in that other system, being able to cast only a few spells per day and knowing only a handful of spells in total. No, T&T Wizards can cast spells as long as they have the WIZ or STR (or whatever attribute is being used) and this energy is recovered relatively quickly. Players of Wizards should therefore be very familiar with all of the spells at their disposal because they can cast them all. First level Wizards in 5th edition start with 10 different spells; they have 20 in 7.5 edition. That is a lot of power. Many of those spells are for use outside of combat and should not be forgotten. Your Wizard is more than a two-dimensional character hurling TTYF at anything that moves. Wizards are powerful on many levels. So learn your spells, become familiar with what they can do, and be creative with them. Then bring your Wizard into the forefront of the action, and not just in combat.