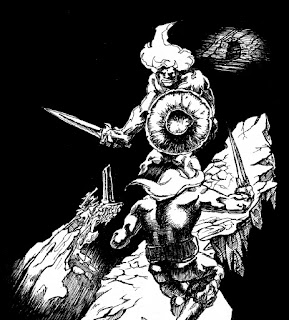 Some time ago I posted an article on different alternate combat methods in T&T. In that article I presented a rough draft a Saving Roll based combat method. A recent post on this subject by Tom Grimshaw at his Alchemy Gaming Blog made me think that it was time to make a more formal post on this system as it has been evolving.

Combat resolution in Tunnels and Trolls™ is often considered a bit too abstract for some players who prefer to have more complex combats with actions resolved for each individual rather than sides. This alternate combat system is based on the T&T Saving Roll. It works so well in so many situations including ranged combat, so why not use it for close combat as well?

To facilitate this system a new attribute is needed: Combat Ability (CA). The CA of your character is the attribute you will use to make your attack Saving Rolls. CA is the average of Strength, Luck, and Dexterity (and Speed if you're using 7th edition). Opponents with Monster Ratings normally have a CA equal to 3/4 of their MR, unless the GM chooses otherwise. This caveat allows for skilled but physically weak monsters; for example, you could have a monster with a MR of 10 but a CA of 20. For these special monsters, a GM may also wish to use the CA in lieu of MR when determining their SR levels needed to hit and to be hit.

Players may use some or all of their Personal Adds in attacking and defending. They may add them to their own attack SR or subtract them from their opponents attack SR. In this way, characters can focus more on either hitting their opponent or blocking their opponents attacks at the expense of doing less damage. Both must be decided each turn before any rolls are made, but you must always make at least a L1SR to hit. As a rule, monsters cannot apply their Personal Adds to their attack SR or defense, although GMs may rule otherwise for certain opponents.

If you successfully make your attack SR, the damage you inflict on your opponent is determined by rolling your Weapon Dice and adding your Weapon Adds and Personal Adds. If your opponent has some kind or armor, the protective value of that armor is subtracted from your damage total and the remaining damage is taken from your opponents MR or CON. If your character is hit, damage is inflicted by your opponent in the same way. The total dice and adds of your opponent are determined by its Monster Rating just like normal T&T combat. As a monster's MR is reduced, it's CA does not change nor does the level of SR needed to hit the monster. The starting MR and CA are considered constant in these respects. The adds of a monster, however, are reduced as the MR decreases.

Attacks are considered simultaneous and the effects of damage are not taken into account until the next combat turn. This method of combat resolution can lead to quick kills (especially of characters), so the GM may wish to reduce all weapon dice by one when employing this system. The high probability of mortal wounds certainly makes possessing both body armor and a shield worthwhile.

Adventure Points earned in combat using this system are based on the attack SRs. The number of APs earned in a fight is, therefore, controlled by the challenge presented; a Level 1 character fighting a monster with a MR of 30 will earn significantly more APs than a Level 3 character, provided he survives. However, a character can earn APs from a battle even if he loses and survives or runs away. All of the SRs made prior to retreating count for the purpose of earning APs. In order to balance this system, Saving Rolls associated with throwing or shooting missile weapons should also count for gaining AP. Those not actively involved in combat will not earn APs for defeating opponents. Wizards that do not want to engage in hand-to-hand combat can, however, earn APs by using missile weapons or casting spells.

Example: Brion the Ugly is a 1st level Warrior with a Combat Ability of 14, a Constitution of 12, and 6 Personal Adds. He is equipped with a saber (3D+4), soft leather armor, and a target shield (takes 9x2 hits). Brion is fighting a goblin with a MR of 20 wearing armor that takes 4 hits. Brion needs to make a L2SR on his CA to hit the goblin which means he needs to roll an 11 or greater on 2D6. Brion's player opts to commit 4 of his Personal Adds to his attack Saving Roll so that he only needs to roll a 7 or greater and 2 of his Personal Adds to fend off the goblin's attacks. Brion's player rolls an 8 and hits. He now rolls 3D6+4 for damage and gets a 14. Ten hits get past the goblin's makeshift armor, seriously wounding him. It's now the goblins turn. Since he has a MR of 20 and is facing a Level 1 character, he only needs a L1SR to hit Brion. He has a CA of 13, so he normally needs a 7 or greater on two dice. However, since Brion committed 2 Personal Adds to defense, he needs to roll 9 or greater. The goblin rolls a 9 and hits despite Brion's efforts. He then rolls 3D6+10 for damage and gets 22. Luckily between Brion's body armor and shield with his Warrior bonus he can absorb 18 hits, so he only takes 4 hits to his CON. Therefore, at the start of the second combat turn, the goblin has a MR of 10 and Brion has a CON of 8. Brion now goes for an all out attack against the goblin, committing all 6 of his Personal Adds to his attack. He rolls a 5 which hits, if just barely, for 14 points of damage. The goblin counters by rolling a 13 (DARO!) and inflicts 3D6+5=9 points of damage. Brion's armor saves him from further injury, but the goblin falls clutching the gaping hole in his chest. Brion has emerged wounded, but victorious, and earned 14+10=24 APs for his two L2 attack SRs.