Continuing my look at the Specialist Mage type, I decided to make a list of the spells that my Conjurer Ulthor may eventually come to know:


That is a total of 22 spells for the Conjurer Specialist Mage. All of these spells are learned automatically as soon as the Conjurer has the ability to cast them. That means no out of pocket cost; for these spells that's a total savings of 106,000 gold pieces. A Wizard could set himself up nicely with that much money.

There are obviously some limitations with this list of spells. Ulthor won't be blasting his foes with bolts of arcane energy or death rays nor will he be healing anyone. He can't even enchant a makeshift wand. But, even at low levels, he can summon flame, water, and light, freeze his attackers in place, make them flee, or bind them to his will, or even raise an animated skeleton from the ground to fight for him. Given more power he'll be able to cloud and even incapacitate the minds of his enemies, create poisonous clouds and impenetrable walls of force, transport himself and others through space, raise zombies, and finally summon fiends and demons to do his bidding. He will be a Wizard to be feared and respected if he lives long enough. 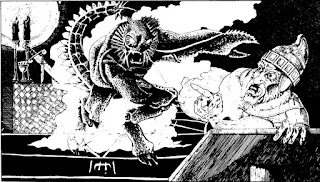