Take That You Fiend! 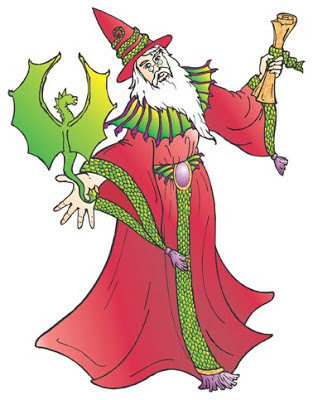 A recent post at The Delving Dwarf discussed the effectiveness of different offensive magic spells in T&T. Specifically Jerri compared the 7th edition spells Call Flame, Blasting Power, Fire at Will, and Take That You Fiend (TTYF). In his analysis, Jerry showed that TTYF was far superior in terms of damage potential, range, and cost to any of these other three spells; so much so that no Wizard would bother with these spells when TTYF was available. To correct this imbalance Jerry made some nice suggestions to alter the other three spells so that they were more appealing alternatives.

While I like these ideas, I think that reconsidering the effectiveness of TTYF is a simpler approach; change just one spell rather than several.

As Jerry showed, TTYF is a first level spell that packs a major punch. For a mere 6 WIZ or STR a Wizard, Rogue, or Warrior-Wizard can deliver hits equal to his/her IQ 100 feet away every time. This attack cannot miss, the hits bypass all armor, and they take effect whether or not the caster's side wins a combat turn. That's quite a spell for every first level Wizard to know right out of the Guild. Get three or four spell casters in your party that know TTYF and you can blast through just about anything. I find it hard to imagine why a Wizard in an adventuring party wouldn't teach TTYF to any Rogues at the first opportunity.

But as Jerry said, the power of TTYF makes the use of other offensive magic unnecessary. The third level spell Blasting Power costs 9 WIZ and has a range of only 70 feet; it does damage in dice equal to the casters level plus the casters personal adds (a 4th level Wizard with 12 adds does 4D6+12 damage). The spell can be powered up to do double the dice in damage from the previous level; for example increasing Blasting Power to a 4th level spell costs 18 WIZ and deals 8D6+12, to a 5th level spell costs 27 WIZ and deals 16D6+12. These higher level spells have a potential for high damage, but you could also roll a handful of 1s. That's a big risk for so many points of WIZ. But magic should be risky, shouldn't it; should the outcome be assured?

My suggested house rule for Take That You Fiend! is to treat the casters INT as a MR to determine the number of dice and adds the spell gets. So if you have an INT of 18, your TTYF deals 2D+9 in damage rather than a straight 18 hits. You could deliver a whopping 21 hits or a mere 11 hits. This introduces a bit of randomness to the effect of the spell that I find appealing and which fits in with the damage of other offensive spells. As a Wizard's or Rogue's INT increases, he/she will be able do more damage, but not to the extreme of the typical TTYF. This change should not only make other combat spells more appealing but also add some extra flavor to the old Take That You Fiend.