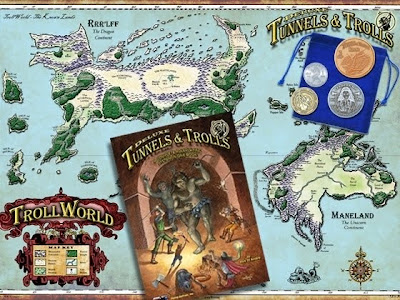 If you have been keeping up with the dT&T Kickstarter page you'll know just how well the campaign is going. The $75,000 goal (once considered a long-shot) was achieved last week and new $85,000 and $100,000 goals and incentives were announced. These incentives were decided upon after a survey of current supporters was conducted. Well, the $85K goal has been reached so there is even more for supporters to enjoy once this project is complete. What has been added with these two milestones?

A second 8-page tip-in of color art, at least half of which will be new, previously unseen art.

An 11x17 poster with the colorized art from the City of Terrors cover to everyone who has ordered Bjorni's Map of Trollworld.

A reissue of the Dungeon of the Bear GM adventure (all three levels) provided as a free pdf to everyone at the $14 level and above with a printed version as a $6 add on.

A GM Screen as a free pdf to everyone at the $14 level and above, plus a full color printed version printed on thick sturdy cardstock (25.5 x 11 inches) as a $5 add-on.

A limited number of the old, long forgotten easel binder provided that a $20 add on.

A wooden box as an add on (price TBD).


That's a lot of new stuff. I'm happy to see GM adventures being included as well as the classic solos.

Better yet, a set new stretch goal has already been announced for $100,000. I think that we can do it.

A compendium of the solo and GM adventures from Sorcerer's Apprentice (I'm really excited about this one), plus the Circle of Ice mini solo, all improved and edited for dT&T, provided as a pdf for every backer at $10 or above, plus as an inexpensive add-on paperback version.

Rick will give a free deck of cards (see http://www.flyingbuffalo.com/pokerdeck.htm )to everyone at the $10 or above level.

Two temporary color tattoo's will be produced and sent to everyone at the $10 or above level (this one has some interesting added value).

A special Liz Danforth and Steve Crompton screensaver will be produced and given free to all backers.